The Hanoitimes - Hanoi seeks collaborative ties with Sweden in manufacture of telecommunication terminals, goods distribution, art and culture, among others.

Hanoi always looks forward to learning Sweden’s successful development experience in a wide range of fields, said Chairman of the municipal People's Committee Nguyen Duc Chung at a meeting with Ann Mawe, ambassador of the Kingdom of Sweden to Vietnam, on December 6.

Chung cited some important fields, including environmental protection, urban development and management and building a green, sustainable and circular economy as focuses for cooperation between the city and Swedish partners.

Hanoi also seeks collaborative ties with Sweden in some of the European country's strengths such as manufacture of telecommunication terminals (especially 5G network), goods distribution, art and culture, among others, the Hanoi mayor added.

He also affirmed that the Vietnam - Sweden relationship has been cultivated by President Ho Chi Minh and Prime Minister Olof Palme and has been fostered by the two peoples over the last five decades.

Chung wished Ambassador Ann Mawe a successful term and to keep contributing to the relationship between the two countries, as well as between Hanoi and Sweden's localities.

For her part, Ann Mawe expressed her pleasure of being appointed ambassador to Vietnam on the occasion of the 50th anniversary of the Vietnam-Sweden diplomatic relations.

The ambassador said that this is an ideal opportunity for the two sides to review the past journey and look to the future.

The bilateral relationship in the future will focus on the fields of mutual interest, in the spirit of beneficial cooperation, Ann Mawe emphasized.

She also expressed high hope in Vietnam's roles as ASEAN chair and non-permanent member of the UN Security Council next year.

The ambassador said there remains a lot of potential for cooperation between Vietnam and Sweden that will contribute to world peace and stability, and believed that the Vietnam – Europe Free Trade Agreement (EVFTA) will open up a great opportunity for cooperation and help Vietnam – Sweden bilateral trade grow in the time ahead. 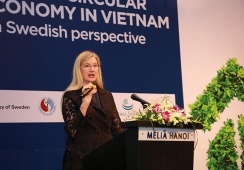 Sweden has been a “true and frank” friend of Vietnam: Ambassador