The Hanoitimes - Hanoi’s air quality index (AQI) measured at 10 monitoring stations in the city was in the range of from 42 to 84.

Air quality in the latest 24 hours in Hanoi has been mostly at the average level and markedly improved, according to the Hanoi Agency of Environmental Protection (AEP).

On November 14 afternoon, the AEP said that Hanoi’s air quality index (AQI) measured at 10 monitoring stations in the city was in the range of from 42 to 84.

The AQI at some monitoring stations stayed at the good level, thanks to the influence of cold air, rain and strong winds the night before.

In recent days, the capital city’s air quality has been mostly at the bad level and harmful to human health. Up to now, there have been significant improvements, the AQI at most monitoring stations in Hanoi today was better than that on November 13.

The highest readings recorded at Pham Van Dong (84) and Hang Dau (81). Other areas had AQI below 50 such as Tay Mo, Tan Mai, Kim Lien. 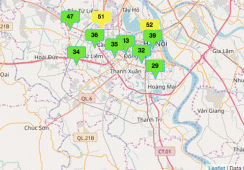