The Hanoitimes - Hanoi’s air quality index (AQI) measured at 10 monitoring stations in the city was in the range of from 51 to 80.

Air quality in the latest 24 hours in Hanoi has been mostly at the average level and markedly improved, according to the Hanoi Agency of Environmental Protection (AEP).

On November 18, the AEP said that Hanoi’s air quality index (AQI) measured at 10 monitoring stations in the city was in the range of from 51 to 80.

The AQI at all 10 monitoring stations stayed at the average level, winds helped the AQI drop by 30-40 compared to the latest 24 hours.

In recent days, the capital city’s air quality has been mostly at the bad level and harmful to human health. Up to now, there have been significant improvements, the AQI at almost all monitoring stations in Hanoi on November 18 was better than a day earlier.

The AEP still recommended that Hanoi’s residents should follow air quality information where they are living and working before going out to prevent diseases. 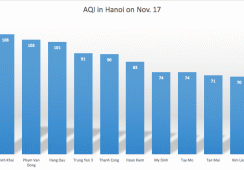