This year GRDP growth was in line with the most optimistic growth scenario for 2021 of 2.35-3% for the capital city.

Economic growth of 6.69% in the fourth quarter of 2021 results in the city’s whole-year gross regional domestic product (GRDP)  being around 2.92%.

The economic growth rate remained lower than the target set for 2021 [7.5%] and that of last year [4.18%], mainly due to the severe impacts from the Covid-19 pandemic, especially in the third quarter when the majority of economic sectors suffered contraction.

Head of the Hanoi’s Statistics Office Dau Ngoc Hung revealed the figures at a press conference on December 28.

According to Hung, Hanoi still managed to attain positive economic growth despite the pandemic situation, in which the GRDP growth in the fourth quarter rebounded strongly to 6.69% year-on-year.

“This is a clear sign that Hanoi’s economy is back on the upward trend,” he added.

Upon breaking down, the industry and construction sectors posted the highest growth of 8.04%, followed by services (6.84%) and agro-forestry-fishery (4.55%).

“Amid growing uncertainties surrounding the pandemic, many big cities in the world had to contend with low or even economic contraction, Hanoi’s strong GRDP growth in the fourth quarter has reflected the effective management of the authorities in both pandemic control and economic recovery,” Hung suggested.

“The determination of the entire political system and the positive response from the public in pursuing a new Covid-19 strategy of safe and flexible adaptation to the pandemic have also been the key,” he added.

Hung added the reopening of the economy in the remaining months of 2021 has been instrumental for a sharp rise of 81.1% in revenue of retail sales and services in the fourth quarter.

This, however, could not prevent a decline of 4.6% in the total revenue of 2021 against last year, a record low in the past several years.

Meanwhile, Hanoi’s trade turnover also rose by 13.7% year-on-year to US$51 billion, thanks to the global economic recovery and strong demands that follow.

This year, Hanoi licensed  24,100 new businesses for a combined registered capital of VND345.7 trillion ($15.1 billion), with 100% of businesses being registered online.

Another highlight in Hanoi’s economy this year came from budget revenue of VND255.1 trillion ($11.1 billion), exceeding the year’s estimate by 8.3%, and credit expansion at 12.6% against late 2020.

As of December 15, Hanoi has provided financial support worth VND6.56 trillion ($287.3 million) for people and businesses affected by the pandemic.

The city’s consumer price index (CPI) remained under control with an average growth of 1.77% year-on-year, the lowest in many years. Hanoi eyes stronger support for businesses in times to come 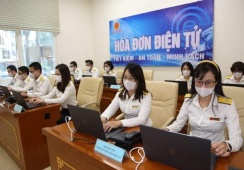