Chien made the statement in the context that the Hanoi People's Committee assigned the municipal Department of Planning and Architecture to make a 1/500-scale plan for a renovation project to build apartment blocks by the lake.

This is an old condominium compound of 67 blocks built from 1960-1970, and have seriously deteriorated. The blocks are on the list of 42 old apartment compounds that have to be evacuated urgently by the Hanoi People's Committee since 2016. G6A building in the area is one of the two apartment buildings on the verge of collapse in Hanoi.

Hanoi will surely not allow the investor to fill part of Thanh Cong lake for apartment building, Chien affirmed.

Recently, Viet Hung Investment and Urban Development Joint Stock Company (Vihajico) has proposed Hanoi to reclaim 4.267 square meters of Thanh Cong lake for housing development and use part of the proceeds from selling properties to rebuild the deteriorating apartment blocks.

Three years ago, a similar proposal was made but rejected by experts.

Dao Ngoc Nghiem, former director of the Hanoi Department of Planning and Architecture and vice chairman of the Vietnam Urban Planning and Development Association, said that filling part of Thanh Cong lake to build apartments will destroy the capital’s landscape and environment.

Experts said that a proposed 35-storey building and commercial center on the reclaimed area of the lake will not fit the surrounding landscape and put pressure on transport and urban infrastructure in the downtown. 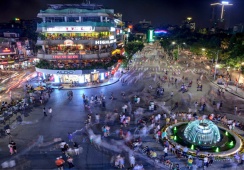 Hanoi strives to preserve its lakes