Hilton exec upbeat about Vietnam as a tourism destination

The Hanoitimes - Hanoi had occupancy of more than 80%, average daily rate (ADR) of US$118, which made the city having one of the highest RevPAR in the region.

An executive of the world hotel chain Hilton has expressed his optimism about Vietnam’s tourism industry and tipped that the chain would triple its presence in the country in the years to come.

“We remain optimistic about Vietnam as a tourism destination, bolstered by the encouraging numbers in arrivals over the last decade when international tourist arrivals increased three-fold from 5 million in 2010 to over 15 million in just eight years,” said Christian Pucher, Senior Director of Development, Asia, Hilton Worldwide at a seminar held by Savills Hotels Asia Pacific last week in Ho Chi Minh City (HCMC).

Pucher said the international hotel company would expand its portfolio in Vietnam from current three hotels to 12 hotels in the in the coming years. “We are absolutely confident that the market will continue to boom as new destinations emerge and gain their spots on the global tourism map.”

At the seminar, which attracted 150 senior real estate and hospitality participants, Mauro Gasparotti, Director of Savills Hotels APAC, gave an overview of Vietnam’s hospitality market in 2019 as well as the challenges and opportunities expected for 2020.

Vietnam welcome 18 million international visitors in 2019, up by 16.2% compared to 2018. Despite being slower growth than previous years, the rate is still remarkable compared to regional peers.

The last few years have seen robust real estate development activities, however, there has been a slow-down in new supply. Contrary to 2018 with 16,200 keys, 2019 had 12,000 new keys, accounting for 12% of total existing supply, lower than the 16% in 2018. Market occupancy declined 4.6%, mainly due to the entry of numerous projects in the coastal area.

On a positive side, both HCMC and Hanoi had a healthy increase in average room rate (ARR). Hanoi had occupancy of more than 80%, average daily rate (ADR) of US$118, which made the city having one of the highest RevPAR (Revenue per Available Room) in the region.

Over 90% of the pipeline is located in coastal destinations, of which more than 50% are Second Home and Condotel products, resulting in fierce price competition.

Due to limited future supply, the performance of HCMC and Hanoi will remain stable, however supply will be in high demand. With the first-ever Formula 1 (F1) Grand Prix held in Hanoi on April 2020, the city is expected to welcome many guests this year, Gasparotti forecast.

At the event, Mauro also guided participants through the process of selecting a hotel operator and a brand from the planning stage until negotiations and finalization.

Having been involved in many operator selection assignments in Vietnam and the region, Mauro said Vietnam needs more brands either local, regional or international as well as more quality properties. In 2010, there were 33 four and five-star branded properties in key tourism destinations. This amount reached 74 in 2019 and an additional 160 projects will enter by 2022. 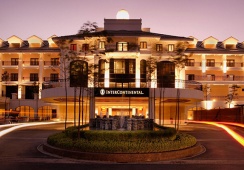 Hanoi, HCMC are top picks for hotel investment in Vietnam