House D67 where history is told

Among many works associated with historical events of the country in the historic Thang Long Imperial Citadel, House D67 is outstanding. This is the place where important meetings of the Vietnam’s Politburo and the Central Military Commission took place during the war against the US. The house attracts tens of thousands of visitors every year.

In 1967, a special work called D67 was built behind the "Dragon House" - the workplace of the Politburo, the Ministry of Defense and the Central Military Commission, aimed to ensure the safety of meetings of leaders when the US started air raids against the North.

House D67 is one of the few war-time works against the US that is relatively intact, as it was built from durable materials like iron, steel, brick, sand, and concrete.

From April to July in 1967, the house was built, which looked just like any common civil house but inside, its military features are revealed.

It includes the three-layer roof with two layers made of concrete and the middle one made of sand, the soundproof wall with 0.6 metre thick, the two-layer door with the outer layer made of one-centimetre-thick steel, escape stairs leading to a basement in the 9-metre- deep with doors made of steel.

Particularly, the basement consists of a large meeting room, a duty room and a room containing equipment to deal with chemical and biological attacks.

House D67 was the headquarters of Communist Party and Army in the wartime associated with the historical activities. It included a meeting room of the Politburo and the Central Military Commission and the offices of General Vo Nguyen Giap and General Van Tien Dung.

From 1968 to April 30, 1975 - the historical liberation day of the country, many important documents were discussed and meetings of the Politburo and the Central Military Commission held at House D67.

The house marked the wisdom and will of the Politburo, the Central Military Commission, and the General Command of the Vietnam People's Army in making policies, strategic plans, directives, and war orders. On December 18, 1974, the historical meeting was convened here for the decisive plan to liberate the South and reunify the country.

Along with the ancient architectural works of Thang Long Citadel, the system of revolutionary relics of the war time was an integral part of this heritage, including House D67.

The house was restored and has been opened to visitors since 2004. Each artifact here can tell various stories about one of the most  hostile and glorious periods of the nation.

The house has been preserved and its value promoted in historical education activities for schools in the area. This is also a highlight in the itinerary to visit the Thang Long Imperial Citadel.

Preserving the monuments and relics in the Thang Long Imperial Citadel is also to preserve the delicate connection between the ancient vestiges of Hanoi with modern historical relics, making the place a cultural relic and historical destination.

Each relic in Thang Long ancient citadel is a witness of history conveying different messages from the feudal dynasties to the glorious victories over foreign invasion in the Ho Chi Minh’s era, according to Major General, Dr. Nguyen Xuan Nang, former director of the Vietnam Military History Museum.

Along with House D67, there are also other relics such as the underground bunker 59 - the office of the General Staff of Vietnam’s People Army or the bunker 66 in the Imperial Citadel of Thang Long, which are being restored. Thereby, they will continue to tell the next generations the proud stories of the country’s revolutionary history. 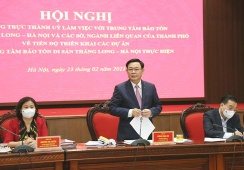