The Hanoitimes - King Le Thanh Tong (1442 –1497) was the most comprehensive, profound and successful, creating a turning point to bring Dai Viet nation into the most flourishing period in its history.

History of medieval Vietnam has witnessed many state reforms, of which the one of King Le Thanh Tong (1442 –1497) was the most comprehensive, profound and successful, creating a turning point to bring Dai Viet country or Great Viet (the former name of Viet Nam) into the most flourishing period in its history.

His mother as well as many others probably did not think that Le Thanh Tong would ever become a king one day. But it seems that the country entrusted him with the uneasy mission of consolidating and building a strong nation.

When King Le Thanh Tong ascended to the throne, he began an efficient reform, starting with administration reshuffling aimed at building a strong state apparatus. “Legal rule going hand in hand with the 'people rule'" was his ideology throughout the reform process.

Le Thanh Tong's first reform was to decentralize the management of land and territory. Until 1489, the country’s geographical administrative map comprised 13 regions, 52 towns, and 178 districts. In each place, it also was subdivided into even smaller administrative units. Public and private farming land ownership was also defined clearly.

The key of Le Thanh Tong’s reform was to build a state with an organizational structure capable of national protection and development. Still based on Confucianism as the foundation, it shared similarities to the Chinese feudal state model, but there were differences in Le Thanh Tong’s regime. He reinforced the king's power and minimized the decentralization and the indulgence of his officials.

This reform took many years and by 1471, a state apparatus was perfected with the basic ideology of “high quality” of mandarins. Accordingly, positions and organizations at all levels were interconnected and supported each other as well as counseled the king but the the king was the decision maker. In this way, dignitaries could not abuse their power. This was the most complete and progressive rule of Vietnam under feudalism.

Le Thanh Tong paid a lot of attention to build competent and qualified mandarins. His view of selecting talents is to combine exams and recommendations. During the Le Thanh Tong period, there were 12 exams which 501 doctors and 10 first doctoral candidates were selected. Those who passed would be appointed to a court position. Every three year, the mandarins had to undergo other exams to test their capability and efficiency in their work. The retired age was 65.

In addition, Le Thanh Tong also launched many ways to control the bureaucracy. Those who had merits would be promoted, those who made mistakes would be punished and those who showed inefficiency in work, would be dismissed and replaced.

In terms of education and culture, Le Thanh Tong also made many important reforms such as paying attention to write books of national history as he considered history as a mirror to see the right and the wrong. The proceedings of ceremonies, music, exam regulations and family education, marriage, among others were also institutionalized.

The reform of King Le Thanh Tong not only revamped the whole royal system, but also transformed all activities of the country, strengthening the country, and the dynasty, making it the most prosperous period in Middle Age history of Vietnam. In fact, it still has left many practical lessons for today. 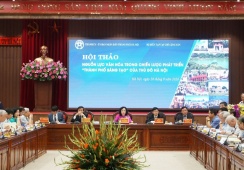