Lost within win, success within failure

The Hanoitimes - A lost political battle didn't automatically mean that this failure was meaningless.

It was undoubtedly clear from the outset the Democrats in the US Congress couldn't successfully impeach the former president Donald Trump. At this second impeachment against him, they certainly would get some Republican senators into their side but surely not enough to have one other result as at the first one. That was why Trump's acquittal was no surprise, again.

But anyway, seven Republican senators, six more than at the first impeachment against Trump, voted with the 50 Democrat senators for the impeachment. This fact was as noteworthy as the remark after the Senate vote by the Republican minority leader Mitch McConnell claiming that Trump should not be convicted but bear his practical and moral responsibility for the attack on the Capitol on January 6.

At the first glance, Trump's second acquittal was a win for Trump himself and his supporters in the Congress as well as in the US and a lost battle for the Democrat. It would reserve chances and ways for Trump to be politically active after having left the White House, especially to continue to dominate the Republican Party and to play some roles in the 2022 mid-term election and the 2024 presidential election.

It would give them a bit of gratification after having had lost both the White House and the Senate. With this Trump's acquittal, they could demonstrate that the Democrats now couldn't do anything the later would like to do in the US.

But in the reality, there is some lost within this win for Trump personally and the Republican still supporting him and some success within this failure for the Democrats and for the now US president Joe Biden personally. This impeachment against Trump was a further demontage of Trump's reputation and the credibility of the Republican Party.

It has deepened the already apparent divide within the Republican Party and between Trump and this party. It put the Republican Party into inglorious light before the general judgement of American voters. It would be a very important contribution to making impossible for this party, for Trump personally and for his allies to win essential power-constituting elections in the next future.

The Democrats and he personally are fully aware that the best way and most effective means to maintain electoral victories in the next future I’m ever ending powers struggles with the Republicans are successful governing and only better governing than Trump had did wouldn't be enough to prevent the Republicans or even Trump to seize state powers again.

Therefore, a lost political battle didn't automatically mean that this failure was meaningless. 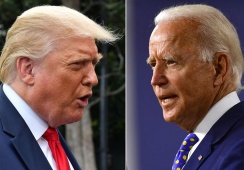