March 25: One more doctor in Vietnam infected with coronavirus

The Hanoitimes - All the seven patients confirmed on Wednesday are Vietnamese.

Vietnam on Wednesday confirmed seven more people positive with the coronavirus, including a doctor who is in charge of taking care of Covid-19 patients in Hanoi, taking the tally to 141.

A 29-year-old female doctor was exposed to the virus when she took care of a British patient (Patient No.28) at the National Hospital of Tropical Diseases in Hanoi.

She is the second doctor in Vietnam infected with the virus. The first one is her colleague who joined the medical force in the fight against the pandemic in January 31.

So far, four medical staff have been infected with the virus, including two aforementioned doctors and two nurses at Bach Mai Hospital, one of the leading hospitals in Vietnam.

All the seven patients confirmed on Wednesday are Vietnamese. Of them, six returned from Europe and the US, including four students.

The additional cases lift up the figure in Hanoi to 50, and Ho Chi Minh City to 34 (including three recovered).

As of March 25, up to 17 people have recovered while 26 others have tested negative with the virus for one to three times each.

Of total 141 infected cases in Vietnam, 34 are foreigners, according to the Ministry of Health. 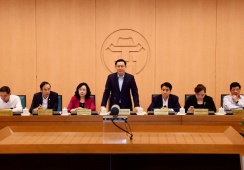 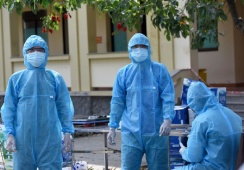