The Hanoitimes - Half of the newly-detected cases on March 28 are linked to Bach Mai Hospital, the largest hospital in Vietnam.

As of March 28, the tally of coronavirus cases in Vietnam is 174, including five linked to Bach Mai Hospital where the first medical staff in Vietnam were confirmed positive with the virus.

The new cases confirmed on March 28 in connection with the hospital include an employee (patient No.174) working in the hospital’s canteen, a woman (patient No.172) who is daughter-in-law of patient No.133 treated at Bach Mai, a 27-year-old man accompaning his father who was a patient at Bach Mai Hospital, and two employees providing food for the hospital.

Five out of 11 new cases confirmed during the day were Vietnamese nationals coming from Russia, the US, the UK, and Thailand.

The only foreigner, a Danish visitor of 20 years old, landed at Noi Bai International Airport in Hanoi on March 8.

The latest cases have driven up the sum in Hanoi to 61 and that of Ho Chi Minh City to 45, the largest numbers of SARS-CoV-2 infections in the country. 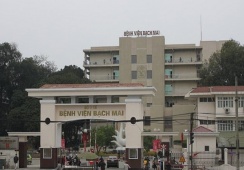