Vietnam’s telecom carriers stopped more than 22,000 spam calls in the first two months of this year.

Nguyen Trung Kien, general director of Minh Nhat Joint Stock Company in Hanoi, said that after he bought a buying a luxury apartment in Cau Giay district, he is often bothered by real estate brokers.

"Dozens of calls from unknown phone numbers disturb me daily. I think the real estate investors sell the buyers' phone numbers to the above-mentioned dealers. I hope authorities will soon solve the issue," Kien told Hanoitimes.

Kien and many others will no longer suffer such disturbance from the spam calls as the Ministry of Information and Communications (MIC) has recently used messages in the form of Unstructured Supplementary Service Data (USSD) to warn spam calls and collect consumers' feedback.

This is a new move of the department to help customers avoid spam calls.

There are five criteria used to determine what a spam call is, including frequency of calls, rate of short calls, rate of calls with a short time between calls, rate of outgoing calls to unrelated subscribers and behavior characteristics of mobile users.

In the case of being identified as a spam call, the subscriber who spreads the call will be handled by blocking outgoing intranet calls and incoming inter-network calls.

“This means that I will no longer be disturbed by junk calls,” Minh told Hanoitimes, adding that he used to get very frustrated having to answer spam calls selling insurance, real estate and housing.

In the first two months of 2021, Vietnam’s telecom carriers stopped more than 22,000 spam calls, according to the Department of Telecommunications.

From July 2020 to February 2021, the Department of Telecommunications cooperated with Viettel, VNPT and MobiFone to deploy a technology solution to screen 111,694 calls and cancel subscription of spammers.

The number of blocked calls shows the determination of telecom carriers and regulators in preventing junk calls and messages in the time ahead.

Telecommunication enterprises in Vietnam have also launched a roadmap on measures to handle junk calls.

Currently, they use big data or machine learning technology to identify subscribers who are suspected of spreading spam calls, thereby taking measures to prevent them.

Besides, from October 2020, mobile subscribers can register with the Department of Information Security to be added to the 'Do Not Call' list to avoid being spammed.

This is also the basis for the authorities to deal with individuals and organizations who intentionally send spam messages and advertising calls.

In December 2020, the Hanoi Department of Information and Communications issued a plan to implement Decree 91/2020 of the Vietnamese government on stopping spam messages, emails and calls.

The capital city has mapped out regulations dealing with phone numbers spreading spam text messages and calls and phone numbers displayed on illegal billboard ads and classified ads in Hanoi.

According to Lawyer Bui Quang Thu from the Hanoi Association of Lawyers, the move by the Department of Telecommunications is essential as anyone's cellphone number is the personal information, which needs to be protected. 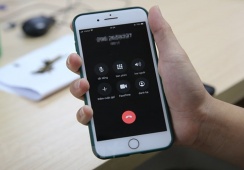