The Mong Cai border-gate economic zone will become a green, modern and sustainable coastal town, an area with a strategic and important position in terms of security and defense of the Red River delta and the country.

Mong Cai, a district of the northern province of Quang Ninh, will be built into a national key border-gate economic zone, according to the latest plan approved by Prime Minister Nguyen Xuan Phuc.

According to the adjusted master plan on construction of Mong Cai border gate EZ until 2040, the area will be an important economic center of the northern region and the economic belt along the coast of Tonkin Gulf and the focal point of the economic corridor Kunming (China) - Hanoi - Hai Phong - Mong Cai - Fangcheng (China).

The plan aims to build the EZ as a center of border trade, industry, tourism, services and seaports, industry and general services of Quang Ninh province and the northern key economic region.

It will become a green, modern and sustainable coastal town, an area with a strategic and important position in terms of security and defense of the Red River delta and the country.

By 2030, it is predicted that Mong Cai EZ population would be up to 320,000 people. The town would welcome  around 5-6 million visitors per year. By 2040, the figures would be more than 460,000 people and eight million tourists respectively.

The EZ, established in 2012, consists of the entire Mong Cai city along with nine communal-level localities of Hai Ha district. It has a total area of nearly 122 ha, including 67 ha of land and 55,000 ha of water surface.

Mong Cai is among eight border gate EZs nationwide prioritised for investment during 2021-25 with a view to driving dynamic and sustainable economic development in the province and the northern key EZ.

The total value of imported and exported goods through Mong Cai city in the 2015-20 period was estimated at US$28.1 billion. 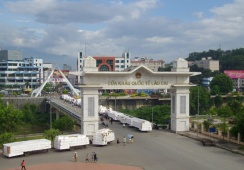