New episode of the old drama

The Hanoitimes - At least until the presidential elections in the US, Trump and Moon Jae-in will not make any significant moves toward North Korea.

It happened suddenly and surprised many. But as suddenly and surprisingly as it had started, it abruptly came to an unexpected end: the political and security situation in the Korean Peninsula did not escalate further. The whole situation remains tense but under the control of both sides.

The official cause of these new developments is, or at least, appears to be the favorite weapon of Cold War-era psychological warfare: propaganda leaflets, first from the South crossing the world's most heavily armed border to the North. The North responded with vocally strong statements and concrete actions such as cutting off all cross-border communication lines and blowing up the Inter-Korean Liaison Office. The North also threatened to resort to military means and action against the South which were then suddenly called off by North Korea's leader Kim Jong-un personally. Now, North Korea said it would soon send millions of propaganda leaflets across the border and spread them over the South. At the same time, North Korea said it made no sense to continue high-level direct contacts and peace talks with the United States as well as hold new meetings between Donald Trump and Kim Jong-un.

All of these developments give the impression that the peace process and the reconciliation talks between the two Koreas that began almost two and a half years ago encountered a serious setback, or even were reversed. If this were true, it would imply that the so-called Sunshine Policy of the South has failed and the peace and reconciliation process between North Korea and the US would be undermined, or even risk being reversed as well.

The old drama about the Korean Peninsula whose main actors have been the two Koreas and the United States got its new episode. It showed that the three parties still lack the preparation and qualification to jointly achieve decisive progress for both processes. It revealed North Korea's deep frustration over South Korea and the United States, and premonitioned North Korea's new approach and strategy towards the two.

South Korean President Moon Jae-in and United States President Donald Trump are now too busy with their fight against the coronavirus pandemic. Trump is wrangling for reelection. Even if they really wanted to, they both couldn't prioritize in any way resolving their row with North Korea. They prefer to keep their peace and reconciliation talks with North Korea intact. One can easily see that the current status quo is politically much more useful and favorable to them than to North Korea, even in terms of security. North Korea obviously increased pressure on South Korea and the US, warning and dissuading them that it would no longer accept the current status quo and demanding that they update their relations with North Korea. At least until the presidential elections in the US, Trump and Moon Jae-in will not make any significant moves toward North Korea. But new episode of this old drama will be there after the election. 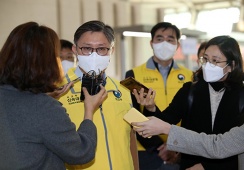