The first phase of the two runway upgrade projects of Noi Bai and Tan Son Nhat airports are expected to be completed by the end of 2020, and become operational in early 2021.

Permanent Deputy Prime Minister Truong Hoa Binh has urged contractors to finish the upgrade of the runways at Noi Bai and Tan Son Nhat airports and put them into operation before the year-end, the peak travel season, local media reported.

Despite facing many difficulties in 2020, the government still earmarks resources for transport infrastructure development, including the aviation industry, Mr. Binh said when inspecting the implementation progress of the projects on October 31.

The development of transport infrastructure plays a vital role in economic development and has spill-over effects on other industries, he added.

As the projects are facing capital shortage, Mr. Binh asked the Ministry of Planning and Investment to arrange funding by adjusting the medium- and long-term capital plan or transferring capital from projects with slow disbursement.

So far, the workload of the runway 1B upgrade at Noi Bai airport in Hanoi has been 75% completed and is expected to finish by December 31. The repair of taxiways and other items are being sped up, according to Mr. Duong Viet Roan, director of Thang Long Project Management Board.

At Tan Son Nhat International Airport, the project upgrading the 25R /07L runway and other taxiways would be completed before December 10 and become operational before December 31.

Regarding the handover of cleared site for the construction of terminal T3 at Tan Son Nhat airport, the deputy prime minister asked the Ministry of Defense to accelerate the review of the land fund in Tan Son Nhat area, soon plan to hand over the site to Airports Corporation of Vietnam for the implementation of the T3 passenger terminal construction project.

The two projects to repair Tan Son Nhat and Noi Bai runways kicked start on June 29 with an estimated cost of VND4.05 trillion (roughly US$174 million), equally distributed to the two. The upgrade will be carried out in two phases, with the first lasting 6 months and the second 14 months. 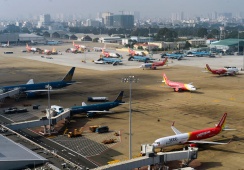 Noi Bai airport runway reparation may be completed this November