In the complicated context of the Covid-19 pandemic, online theaters or live broadcast plays are the solution for performing arts to reach the audience.

Artists and local culture managers are trying to keep audiences entertained during strict social distancing in Vietnam, however, there are still many barriers for the 'Online Theater' project to develop successfully.

Two shows, a tuong play (a form of Vietnamese classical opera) and a performance of the Viet Bac Folk Music and Dance Theater have recently been broadcast live on the VTV1 channel, bringing a way of entertainment for the audience in the lockdown at home.

The Tuong show, called Trung than (the Loyal Mandarin) was about the career of mandarin Le Van Duyet (1763-1832) who served Kings Gia Long and Minh Mang. The show won the silver medal at the National Tuong and Folk Opera Festival 2019. Meanwhile, the show of the Viet Bac Folk Music and Dance Theater told the story of the local soldiers and life in wartime through the performance of famous singers.

Besides these two art forms, others such as cheo, cai luong, puppetry, circus, contemporary art, will be also broadcast live on the channels of Vietnam Television, Vietnam News Agency Television, VOV Television, and some local radio and television with the aim of staying connected with the audience during the time of the pandemic.

Nearly two years since the outbreak of the Covid-19 pandemic, art troupes are unable to organize shows and many artists are struggling to earn income. Theater leaders have to work hard to find a way for artists to maintain interaction with the audience. They created a Vietnamese performing arts channel on YouTube and Facebook to broadcast online a number of professional art competitions and festivals nationwide in 2020.

The channel has been so huge a success that the Ministry of Culture, Sports and Tourism decided to broadcast online and on television channels other performing art shows.

Tran Huong Duong, Deputy Director of the Department of Performing Arts, said: “The Ministry of Culture, Sports and Tourism has cooperated with Vietnam Television, Radio the Voice of Vietnam and others of the provinces and cities for theatrical performances broadcast. The department sends good programs and artworks to the broadcasters for them to edit and air".

Duong also added that the programs on television will be maintained even after the Covid is controlled and live performances are allowed. Accordingly, new shows will be performed live while older ones will be streamed online.

Meritorious Artist Xuan Bac, Director of the Vietnam Drama Theater said “Building an online theater on television and social networks is an inevitable trend for performing arts to develop.”

Despite promising benefits, some said that the construction of an online theater needs to be carefully planned and carried out.

Meritorious Artist Tran Ly Ly, Director of the Vietnam National Opera and Ballet, said that only some very selected acts of a theatrical play would be broadcast to fit the TV schedule. Some classical works such as “Swan Lake” or “The Misérables” cannot be broadcast on television in their original form because it would be difficult to sell tickets for the theatrical performance later.

Agreeing with Ly, People’s Artist Tong Toan Thang, Deputy Director of the Vietnam Circus Federation, said that the circus, as well as puppetry and other art forms for children, needs interaction between artists and audiences.

“Broadcasting the circus on TV will reduce the excitement for child audiences. Moreover, performing on a square stage is difficult for the artists, especially with acrobatic and swinging tricks. Filming live performances at the Central Circus is also a challenge for the television team,” he said.

Obviously, artists are struggling with being idle and the loss of their audiences. However, online or TV theater is an immediate solution for performing arts to be widely introduced to all audiences. Television channels are also asked to consider broadcast art programs at a prime time so that they can really reach the public. 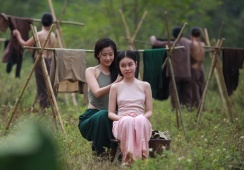