The resumption of production activities will be organized on the principle of ensuring production and Covid-19 prevention and control.

More than 35,000 workers in 188 enterprises in the northern province of Bac Giang have returned to work after the Covid-19 pandemic is deemed basically under control, according to Chairman of the provincial People's Committee Le Anh Duong.

Duong emphasized that the Covid-19 pandemic in Bac Giang has been initially controlled, so the province will move to the new stage of “dual goals” from July 1.

The chairman requested Bac Giang Industrial Zones Authority to be drastic in preventing and controlling the Covid-19 outbreak, and strictly handle enterprises flouting the pandemic regulations.

Besides, the province has opened a "safe zone" and a "free entrance without examination" for worker's movement in industrial parks. The enterprises’ departments and branches are requested to coordinate with localities to arrange a safe production chain under the motto "safe workers, safe stay and safe businesses", Duong noted.

“The resumption of production activities will be organized on the principle of ensuring the harmonization between production restoration and Covid-19 prevention and control,” he said.

According to Nguyen Xuan Ngoc, deputy manager of Bac Giang Industrial Zones Authority, the northern province, which leads the nation in Covid-19 tally with 5,644 cases in the latest wave, plans to bring about 400 enterprises back to production by July 1.

“Furthermore, the province plans to allow workers to return to industrial parks from now until the end of the year in a staggered manner, accordingly, 30,000 workers will be back to work by June, other 50,000 by August, and 100,000 by October. From the end of November, we expect over 120,000 suspended workers would get back to work under the current plan,” Ngoc said.

The provincial authorities will work with enterprises to arrange accommodation for workers inside and outside the production area. Expenses for renting shelters will be covered by enterprises. People who work on the same line and factory will stay together so that if there is any suspected case of Covid-19, the authority can easily control the situation.

"In the beginning, it may be difficult to arrange a large number of workers. But the province is planning to support enterprises as much as possible,” Ngoc added.

Moreover, Bac Giang has resumed transport vehicles from other provinces but the drivers are still required to declare their health, phone numbers, and measure body temperatures to keep a log of travel history. For trucks carrying goods from Bac Giang to other provinces, enterprises will need to make Covid-19 safety records for both people and vehicles.

Bac Giang province has 240,000 workers employed in six industrial parks, where many global manufacturing giants like Foxconn and Luxshare, which are both assemblers for Apple, site their operations. 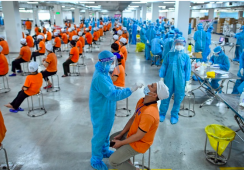 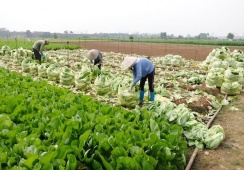 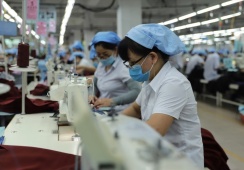