Delegates believe in success of the Congress

The Hanoitimes - Delegates are excited about the ongoing Congress with its organization work, document drafting process and personnel preparations.

Vietnamese delegates to the 13th National Party Congress expressed their belief in the success of the event, being confident that it will lead the country on the roadmap towards the strong development.

Mr. Huynh Tan Viet, member of the Party Central Committee, Secretary of the Party Committee of the Central Agencies' Bloc: Impressions and expectations on the resolutions of the Congress

The report presented by the Party Secretary-General and the State President covered all internal issues and set major orientations for the country's socio-economic development in the coming period. I’m very impressed with the report, including three breakthroughs in institutions, human resources and transportation it put forth. If we all strive our utmost, the major goals set out in the report will be fulfilled.

I highly agree with five guiding viewpoints of the 13th National Party Congress, six key tasks and solutions and three strategic breakthroughs raised in the report from the 12th-tenure Party Central Committee on documents submitted to the Congress.

With the solidarity and unity of the whole Party, the efforts of each official, party member and the entire people, I believe that the goal of becoming a high-income developed country by 2045 will come true.

To organizae the Congress successfully, each delegate should promote the responsibility and contribute to the development of the Documents. I do belief that we will successfully implement the Resolution of the 13th National Party Congress, therefore, the country will record a new development. As Party Secretary-General and State President Nguyen Phu Trong said, the country will establish new miracles in the process of construction and development in the coming time.

Mr. Nguyen Thanh Ngoc, Deputy Secretary of the Provincial Party Committee, Chairman of the People's Committee of Tay Ninh province: The preparation work for the Congress is meticulous in all aspects.

The Congress was meticulous and articulately planned in all aspects, from the drafting of documents, personnel preparation to logistics and security. This is the congress that people, officials and party members have placed their trust in and have great expectations for the development of the country in the coming time. As responsible delegates, we will do our best, bring our wisdom to contribute to the success of the Congress.

The Congress is a milestone for the new development of the country, continuing to inherit and promote achievements after 35 years of the renewal process, 10 years of implementing the Platform on National Construction.

The objectives and orientations set out in the draft political report at the Congress have clearly shown the vision and strategic direction both in the immediate and long term, towards a brighter and better future for the Vietnamese people.

These orientations are concretized in stages, with specific roadmaps and clear goals for the 5-year, 10-year milestone and vision to 2045. Fulfilling those orientations is the responsibility of the Party and the people. Vietnamese have faith in decisions made at 13th National Party Congress 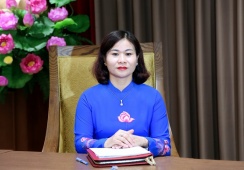