The Hanoitimes - The fight has drawn the participation of all fronts regarding health system, military, public security, and local authorities.

An official from the US Centers for Disease Control and Prevention (CDC) has affirmed that it’s political commitment early has enabled Vietnam, the country of nearly 100 million people, to significantly curb the spread of the new coronavirus.

With the motto “fighting the epidemic is like fighting against the enemy”, Vietnam indeed has been ready to take all measures overnight to stop the virus spreading.

Accordingly, the fight has drawn the participation of all fronts namely health system, military, public security, and local authorities.

In another move, the CDC official said that there’s no evidence showing Vietnam’s data on Covid-19 pandemic is falsified following some speculation about the country’s relatively low infections.

He said the CDC office has closely worked with agencies in Hanoi and the Ministry of Health and no indication that those numbers are false.

With experience gained from dealing with the 2003 SARS and 2009 H1N1 pandemics, Vietnam’s government started organizing its response in January as soon as reports began trickling in from Wuhan, China.

The country quickly came up with a variety of tactics, including widespread quarantining and aggressive contact tracing. It has also won praise from the World Health Organization and the CDC for its transparency in dealing with the crisis.

Tens of thousands have been put under mass quarantine in hospitals, military barracks, and concentrated facilities.

By the end of March, Vietnam had banned all international entries and closed borders to foreigners. From April 1, the country was put under a two-week social distancing order. Later on, the extension request has been applied for 12 cities and provinces, including Hanoi and Ho Chi Minh City. 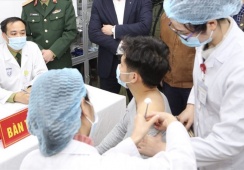