The Hanoitimes - Government should take measures to protect private enterprises in key economic sectors to enhance their international competitiveness.

In recent years, the Party, Government, and Hanoi city have had breakthrough policies to reform administrative procedures, improve the business environment, and solve difficulties for businesses, especially in the private sector. However, for the private sector to become the pillar in the country's development, there is a to-do list.

The development of the private sector in recent years has shown that the government’s Resolution No. 10 / NQ-TW has gradually come to life, promoting faster and more sustainable socio-economic development, significantly contributing to the state budget. In particular, it has encouraged a potential component of the country’s economy, mobilized social capital, increased internal resources, paved the way for major private participation in the development of the national economy and proved to be one of the pillars of the nation’s growth.

For example, tourism is a general economic sector with the participation and association of many private enterprises, a rapid growth sector at the rate of over 10% per year. This is the core force to achieve the development of the tourism industry by 2025 with an expected total revenue of $45 billion, contributing 10% of the country's GDP.

Vietnam's private economic sector currently has nearly 800,000 enterprises creating about 12 million jobs, contributing 43% of GDP (compared with the State economic sector with nearly 30% of GDP and the FDI sector about 18% of GDP). Particularly, in the service industry, the private sector contributes to over 85% of GDP.

Among them, the Hanoi’s private sector has developed in both quantity and quality, contributing an estimated 22 % of the GRDP in 2020, an increase of more than 1.2 % compared to 2015, attracting about 83% of the total workforce.

In fact, the private sector of the capital includes small and medium enterprises that have contributed nearly 40% of the GRDP and 50% of the labor force, and 15% of the budget revenue; largely contributing to the socioeconomic development of the city. In order to maintain and develop this achievement, the government must pay attention to creating all favorable conditions for the private sector development.

In fact, there is a lack of proper assessment as well as attention in policies and solutions for small and medium enterprises in the city in particular, and in Vietnam in general. Therefore, it is very important to have policies to support the development of business and trade associations toward completing the organizational model, expanding the scale, number of members, and diversifying products and services. At the same time, it is necessary to renovate and modernize methods and improve operational efficiency in accordance with current legal regulations, commitments and practices in international integration in the coming time, both inside and outside the capital.

In particular, the policies should aim at increasing the role, powers and responsibilities of associations in  supporting businesses, especially in coordination with the government, the authorities of the capital and other localities in researching and implementing a number of programs to support businesses in creating new products; applying new technology and international standard in business management and administration so as to create a strong driving force to promote the innovation, development and modernization of the business community.

Based on such foundation, the competitiveness of enterprises in the international integration process could be improved and so that enterprises could actively seize  opportunities, especially from the CPTPP and EVFTA. At the same time, it is necessary to solve difficulties and challenges in the process of international integration and expand cooperation with other potential capitals and cities.

In its role as the coordinator, the Hanoi Association of Small and Medium Enterprises (Hanoisme) should firstl encourage businesses to invest in areas that are beneficial to the society. Hanoism should  map out  policies and solve shortcomings in the legal framework  for a concerted guidance for the industrial and agricultural development and trade promotion. The Association should  follow up, update and  forecast scenarios of the domestic market as well as export, helping businesses to devise appropriate production goals, especially those businesses in agro-industry.

Hanoisme should help new businesses in delineating their strategic goals and long-term vision, encouraging them to manufacture goods with a high value-added applying advanced technology, and expand export markets. The Association should  contribute to administrative reform to create more conveniences for businesses. The administrative procedures should be  decentralized, handing more powers to departments, specialized sectors and districts. It is also necessary to strengthen the inspection and supervision of enterprises' proposals and the results of public service performance.

In particular, in the context of world economic fluctuation today, it is necessary to build and develop key economic sectors of the country, focusing on two bases: forming a regional financial center and industrial production hub so as to lure the investment capital flows shifted from China due to the trade tension between this country and the US. To do so, it is necessary to ensure fair competition among economic sectors, not only giving priority to foreign direct investment (FDI) enterprises but also private ones.

At the same time, private enterprises with experience and abundant resources should be awarded large projects, helping the government to curb public debt and take advantage of private capital and FDI. In certain cases, the Government should take measures to protect private enterprises in key economic sectors to enhance their international competitiveness.

Over the past decade, especially in the past five years, Vietnam's economy has been known in the world through the names of private corporations such as VinGroup, Sun Group, T&T Group, Thaco, Vietjet, TH True Milk, Masan, Among others. Moreover, VinFast Car, Golden Bridge, Van Don Airport, Vietjet Air, Bamboo Airway are typical representative of Vietnamese business community in recent years.

"In order for private enterprises to develop, institutional reforms need to focus on the reform of the ownership and the restriction of the land ownership which represent a hindrance to  large-scale production. It is necessary to adjust the land law to give more favourable conditions to agricultural production and f land consolidation. Besides, state-owned enterprises which account over 30% GDP and still hold monopoly in many sectors, which prevents  the development of private enterprises from contributing more to the GDP.” said Former Minister of Trade Truong Dinh Tuyen.

* Mr. Mac Quoc Anh is the Vice President and General Secretary of Hanoi Association of Small and Medium Enterprises (Hanoisme) 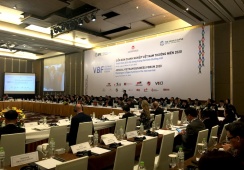