In the 68 years of history professor Nguyen Quang Ngoc, 51 have been dedicated to the study of Hanoi.

“After graduating from high school in Hai Phong Northern Province, I passed the entrance exam to the Hanoi University of Social Sciences and Humanities (HUSSH), majoring in history. the first lesson that I was taught was  the Introduction to Archeology in which my lecturer told us “Now we eat Hanoi rice and drink Hanoi water so we should keep that in mind to pay something back to Hanoi later” I love history and have attached myself with Hanoi from that first lesson," Prof.Dr. Nguyen Quang Ngoc shared his memory.

The mathematics student jumping into the history

Born on September 14, 1952 in a farmer family in Vinh Bao district in Hai Phong province, Prof. Dr. Nguyen Quang Ngoc was very interested in mathematics. In 1969 after the high school graduation, he did not know which university he would apply to. One day by chance he listened  about Professor Nguy Nhu Kon Tum on the radio. Professor Kon Tum was the headmaster of HUSSH, a leading scientist of the country. The radio story inspired him in learning about the university and decided to major in mathematics at the university.

He was very disappointed later because for some reason his name was listed in the Department of History and he asked to change to the Mathematics. However, while waiting for being returned to the mathematics major, the new student still had to study a few first days at the history faculty. He still remembers the poor classroom with some vestige of bomb without doors, tables, and chairs. Students were discharged soldiers, volunteers, secondary education teachers, officials and even high school students, everyone stood or sat on the floor. “It’s hard to imagine that was a classroom,” he recalled.

His teacher was approximately 40 years old, with bright eyes, greeting students. He started his lectures with stories of here and there and from yesterday, today to tomorrow. He said that he was teaching his students the way to ‘read the book of the earth’ to ‘understand the book of life’ and to ‘ask the stone to tell story’.

His extensive knowledge and especially his unusual teaching style really lured his students. By the end of the first lesson, Nguyen Quang Ngoc forgot about his request to be returned to mathematics. From the beginning, he made a lot of efforts on studying to catch up with friends who came from other big cities and had better chance of study before. His effort was soon noticed by his teachers.

Professor and historian Phan Huy Le was the first who paid attention to him and guide him professionally to become a lecturer at the subject of History of Vietnam in the Middle Ages. The subject associated with the names of many famous historical professors such as Dao Duy Anh, Phan Huy Le, Phan Dai Doan, Pham Thi Tam, among others which encouraged Nguyen Quang Ngoc a lot.

Destiny with the capital thousand years of civilization

Professor Nguyen Quang Ngoc said that the lectures of the teachers showed him that the country's historical progress has to do a great deal with Hanoi. Then he made field trips  to historical sites to corroborate the fact that almost all Vietnamese feudal dynasties established their capital in Hanoi.

“After graduating from university and being offered a job to become the school lecturer, I have more opportunities to study deeply about Hanoi,  as it was my personal passion. Since 1996, I became the Head of the Department of History at HUSSH and eight years later, in 2004, as the Director of the Institute of Vietnamese Studies and Development Science from Hanoi National University, I started to organize topics or research works about Hanoi," Professor Nguyen Quang Ngoc said.

At the international scientific seminar "Sustainable development of Hanoi - the capital of Culture, Heroes, and Peace" held on the occasion of the Grand Anniversary of 1,000 years Thang Long – Hanoi, the decision to found a new field of study, the Hanoi Study, was adopted with Professor Nguyen Quang Ngoc, the Director of the Institute of Vietnamese Studies and Development Sciences and the Chairman of the Hanoi Historical Association as the architect and executor of researching on the subject.

Accordingly, a series of state-level scientific programs, projects and national and international scientific conferences about Hanoi Capital's research and development were carried out for the foundation for the new study department of Hanoi. The Hanoi Center for Hanoi Study and Development was established and put into operation, becoming a trusted address for national and international experts, researchers and teachers about Hanoi since 2014.

As the head of the center, Prof. Dr. Nguyen Quang Ngoc and his colleagues initially built a theoretical basis and methodology for Hanoi study associated with Area Studies and Development Science.

Together with his colleagues, Prof. Dr. Nguyen Quang Ngoc wrote and published the Hanoi textbook, some basic reference books and dozens of other scientific articles and books. This is still an early stage but it has confirmed the establishment of a field of study  plays a very important role in the strategy of human resource training and sustainable development of the capital.

"I know that the road ahead is still rough and I need to try harder, but I believe that Thang Long - Hanoi is always an endless source of inspiration for every citizen of Hanoi as well as visitors to the capital city to dedicate themselves to the city and  promote the tradition of the capital more than 1000 years of civilization, heroism, the city of peace ,”  said Prof. Dr. Nguyen Quang Ngoc. 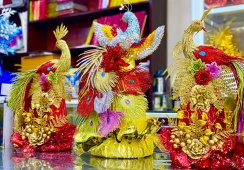 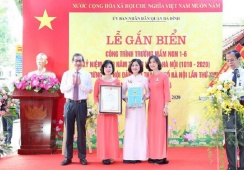 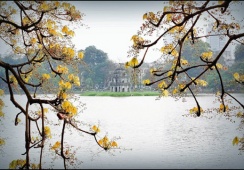