Work on Vinh Tuy Bridge 2 kicked off in Hanoi

The Hanoitimes - The project aims to meet growing transport demand between the two sides of the Red river.

The Hanoi People’s Committee on January 9 announced construction of Vinh Tuy Bridge 2, which will become the seventh one spanning the Red River.

The new bridge is built downstream of the Red River, parallel with Vinh Tuy Bridge 1, which was built more than 10 years ago.

The new bridge was built with an estimated investment capital of more than VND2.54 trillion (US$107 million), using Hanoi’s public investment fund.

The total length of the bridge and the approach roadway is 3,504 meters with four lanes. The construction of the project is slated for completion in 2022.

Speaking at the ceremony, Chairman of the Hanoi People's Committee Chu Ngoc Anh said that the bridge aims to meet growing travel demand between Hanoi’s downtown and the north and northeast region of the city.

Additionally, the project will lay foundation for the establishment of residential areas in the north of Hanoi, gradually completing the capital city’s transport infrastructure network, Mr. Ngoc Anh noted.

He asked the municipal Departments of Transport, Construction, the People's Committee of Hai Ba Trung and Long Bien districts to coordinate with the investor to ensure the project quality and normal living of local residents during the construction progress.

The Hanoi mayor requested construction contractors and consultants to supervise specific and detailed plans to ensure the commitments that has been signed with the investor as well as the construction progress on schedule.

The Vinh Tuy bridge 2 project was approved by the Hanoi People’s Committee in 2011.

In a long-run, Hanoi has planned to build at least ten more bridges connecting Hanoi with neighboring provinces. 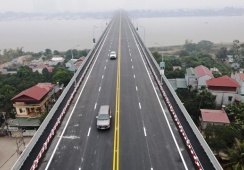