The Hanoitimes - So far, solar power in Vietnam accounts for 44% of total solar capacity in Southeast Asia.

Environmentalists hope that success in developing solar power will persuade the government of Vietnam to scale back its ambitions for coal-fired plants, according to The Economist.

By the end of 2019, the country counted with 5.5 gigawatts (GW) – more than Australia, with an economy almost six times the size – just two years after the government paid suppliers a generous US$0.09 per kWh produced by big solar farms.

Meanwhile, the Vietnamese economy has been growing by 5-7% a year for the past two decades. The government has plans to double power generation by 2030, but estimates that supply may run short as soon as next year.

As a result, it needs to find new sources of power as soon as possible.

Coal is the cornerstone of Vietnam’s energy supply. Under current plans, the fleet of coal-fired power plants will soon triple. But construction has been dogged by regulatory delays, local opposition and flagging investor interest. Building a new plant takes the better part of a decade.

To encourage the development of solar power projects, the government has begun improving the grid and it decreed in November 2019 that in future it would not offer a feed-in tariff, but instead auction the right to sell solar power to the grid, with the winner being the firm that offers to do so at the lowest price.

Later this year it is due to release new targets for generation capacity in 2030. Wind and solar have almost already met their current goal of providing 10% of power, ten years ahead of schedule.

In another move, prices are likely to continue to move in renewables’ favor. Wood Mackenzie, a consultancy, thinks power from large solar farms in Southeast Asia will be at least as cheap as that from almost all coal plants within five years.

Given that coal plants have lifespans measured in decades, Vietnam and others risk locking in unduly expensive generation capacity.

Vietnam’s experience suggests that not all the planned coal plants will be built. But solar sudden spark in Vietnam should at least change officials’ views of what is possible, said The Economist.

According to Wood Mackenzie, Vietnam currently tops Southeast Asian countries in solar power and the country’s solar power accounts for 44% of the region’s capacity.

The country targets to raise solar power capacity to 7.7 GW in 2020, according to Vietnam Electricity (EVN).

The development of solar power in Vietnam has beaten all expectations of developing renewable energy in the country where fossil fuel has played a crucial role for decades, said Melissa Brown, Energy Finance Consultant at the Institute for Energy Economics and Financial Analysis (IEEFA).

This will support Vietnam’s fast growing economy at a time when the country’s slow-moving pipeline of baseload coal projects faces new environmental challenges, she noted. 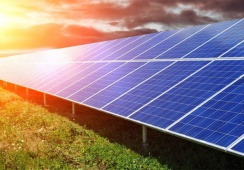