The Hanoitimes - The Hanoi mayor said this would be one of the measures to prevent the epidemic from spreading in the next two weeks.

Chairman of the Hanoi People's Committee Nguyen Duc Chung proposed that some administrative offices in the city and elsewhere should be temporarily closed to limit the spread of the deadly coronavirus, VnExpress reported.

At an online meeting on March 29, the Hanoi mayor said this would be one of the measures to prevent the epidemic from spreading in the next two weeks.

He stressed that when the risk of spreading in crowded places is minimized, the epidemic will become "isolated flames" and could be extinguished easier.

Hanoi has ceased non-essential services since March 28. However, as workers who are on leave are flocking home in outer provinces and causing the risk of infection, Chung proposed the Prime Minister ban restaurant and hotel staff and street vendors from returning to their provinces.

Chung added that the Ministry of Health and the Central Institute of Hygiene and Epidemiology have allowed the Hanoi Centers for Diseases Control and Prevention (CDC) to test and confirm Covid -19 patients. Therefore, he suggested Hanoi be given the power to annouce positive cases to timely put those who came into close contact with them under quarantine.

The Hanoi mayor also proposed the Ministry of Health purchase more anti-epidemic equipment, especially ventilators as Hanoi currently has only 260 ventilators which are used for both Covid-19 patients and others in critical conditions.

Hanoi reported 77 infection cases as of March 30, with the first one detected on March 6. 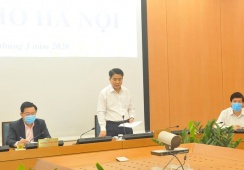