Tay Ho is one of the prettiest places in Hanoi, especially in the late afternoon when you go for a walk to enjoy the beautiful sunset on the lake and watch the locals exercise, ride a bike, or gathering with their family and friends, according to Brian Mcguire, an English teacher from the UK.

Brian, who has lived in Hanoi for more than 10 years, has no plans to return to his homeland, where he says that it is cold and rainy too much. “I love the sun and the warm-hearted Vietnamese. I will live here forever,” he told The Hanoi Times.

Brian is just one among many visitors coming to Hanoi and falling in love with the city, especially the Tay Ho area, also known as the expat zone.

In fact, the area is one of Hanoi's best tourist attractions nowadays, welcoming nearly half among 29 million visitors of the capital city in 2019. The district's target is to receive 19 million visitors shortly after the Covid-19 pandemic.

According to Nguyen Dinh Khuyen, Chairman of Tay Ho District People's Committee, Tay Ho District has a rich culture and history. It is one of the most developed and modern districts in the capital. Thanks to large tourism resources, Tay Ho is making an effort to affirm its position on the city’s tourist map with attractive products.

Located in the northwest of the capital, Tay Ho has thick layers of culture accumulated over centuries and boasts a system of scenic spots and diversified cultural heritage. There are 71 relics in the district. Among them, many have been ranked as national heritages and become famous destinations such as Tran Quoc Pagoda, Quan Thanh Temple, Kim Lien Pagoda, Tay Ho Palatial Temple, Quang Ba Communal House, Yen Phu Communal House, etc.

“Tay Ho is a very interesting place in Hanoi. I can learn a lot about the city and its culture and history by visiting this place. I like pagodas and temples around West Lake very much. They are beautiful and show the strong influence of the Buddhism religion on the people,” Emma Dupont, a tourist from France, told The Hanoi Times. In recent years, many cafes, bars, and restaurants have been opened in Tay Ho, along with various music and art shows, providing a lively atmosphere both days and nights.

Tay Ho District is named after Hanoi’s largest freshwater lake located in the area, Ho Tay (West Lake), with a water surface of about 500 hectares. It is regarded as the “green lung” of the capital with a lot of green trees around it.

Besides West Lake, the Tay Ho area also has many other ecological landscapes such as Truc Bach Lake, Red River’s rocky bank and garden, West Lake Water Park, lotus ponds in Nhat Tan and Quang Ba wards, among others, attracting a large number of people from the capital and surrounding areas to visit and take photos.

Brian said that Tay Ho is the best place in Hanoi to live.

“There are a lot of convenient stores, restaurants, cafes, bars... so that it's very convenient to eat or hang out with my family and friends. Thanks to the fresh air from the nice lakes and gardens, it’s also good for my son to go out and play,” he shared with The Hanoi Times.

With the tourism potential, Tay Ho district has been identified as a service-tourism and culture center and a natural landscape protection area of Hanoi capital with spiritual tourism, cultural-historical tourism, and eco-tourism as its typical tourism products.

Based on its advantages and potentials, Tay Ho district has built key tourist service points to attract tourists such as a tour to enjoy Quang An lotus tea, the cluster of relics of communal houses and pagodas and do paper-making craft village, projects of Red River rocky bank management and exploitation and lotus cultivation development of in some small lakes in the area.

Favored by Hanoians, West Lake lotus tea is regarded as one of the elegant dishes and the best gift of the capital city. There are several households making lotus tea in the area. One of them whose family has generations involved in the trade, Ngo Van Xiem, told The Hanoi Times “At the peak season of lotus blossom from middle May to early June, we have to hire 10 employees to work with 10,000 lotus flowers a day. In the outbreak of the Covid-19 pandemic, it is still ordered by phone or online service from both domestic and international customers.”

In temporary closure due to the Covid pandemic, it causes great losses for garden owners near the rocky shore of the Red River. However, they are still trying to care for the flowers, swapping the lotus crop for those that bloom year-round for sale as they await the end of the pandemic. “We take advantage of this time to renovate some parts of the garden with more trendy design and Korean soap opera decoration, aiming to give some surprises to customers when they come back,” a representative of Red River Rock Flower Garden informed The Hanoi Times.

“These tourist attractions and projects aim to exploit the cultural factors and natural resources available in the area to both preserve and promote heritage values and develop specific tourism products for Tay Ho,” said Chairman Khuyen.

According to him, in the coming time, the district’s authority will continue to support and encourage people to develop eco-tourism products associated with projects like expanding lotus growing areas to create an ecological landscape, create jobs for 30 households as well as maintain and develop traditional lotus tea making. In addition, the district also leases land to 14 households and individuals in Nhat Tan ward in the Red River rock area to grow seasonal flowers, building it into a destination attracting more visitors each year.

The district authorities are also mobilizing all authority levels, organizations, and people to actively engage in and promote the role of “every citizen is a tour guide” in association with tourism activities to develop a green, civilized, modern, and sustainable tourism. “They are the strengths positioning and developing the Tay Ho tourism brand on the tourist map of the capital,” Khuyen stated. 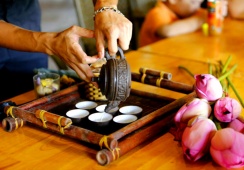