The Hanoitimes - The current Central Committee has 200 members, including 20 alternate ones.

On its third day [January 28] of the 13th Congress of the Communist Party of Vietnam, delegates focus on personnel work.

After the morning session, which focused on debating the documents, in the afternoon, the delegates will listen to reports on personnel work for the 13th Congress as well as discussing and deciding the number of the CPV’s Central Committee members.

They will proceed the session with discussions on qualifications of Party members. The list of self-nominated and nominated candidates will be available for debate.

The current Central Committee of the 12th Congress has 180 full members and 20 alternate members.

Earlier in the 2nd Day, the delegates joined discussions on the congress documents with 23 speeches delivered by representatives of the army, the police, the Supreme Court, the Central External Relations, the central bank, the Ministry of Finance, the Hanoi delegation, the Ho Chi Minh City delegation, among others.

Personnel work is a top-down process in which the Central Commission of Personnel and Organization assists the Central Committee and the Politburo to select cadres from the various regions and provinces as well as from central apparatus.

Some photos on the 3rd day session. 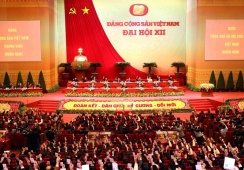 What did Communist Party of Vietnam discuss in previous congress?