The Game With Failure

In only a little bit more than one year, America witnessed and witnesses two times of impeachment against the same person.

The difference is simply that this person was at the first impeachment the incumbent and at the second one the former US president and his name is Donald Trump from the so-called Grand Old Party (the Republican Party). The first impeachment against him was in 2019 and the second is now going on. In both times, the driving force behind them was and is the Democratic Party, having been aware of the fact that it was then and will now be impossible to impeach him because it was then and will next be impossible for the Democrats to reach at lease the two-third-majority in the Senate as required by the US constitution to successfully impeach the incumbent president.

Donald Trump is now not any more president and moving him from power is surely nonsense. Impeaching him at present can in no way be succeeded for the Democrats. Their failure is as good as preprogrammed.

Unlike at their first impeachment against Trump in 2019, the Democrats now also uses their second impeachment against Trump to show their newly gained political powers in America with their majority in both the House and the Senate as well as with president Joe Biden at the White House. Their unmisunderstandable is simply that they now are in the position and in the mood to lead America and to determine America's political agenda for at least next two years.

Their game with this failure is at the same time the start of their preparations for their next powers struggles with the Republicans in the so-called mid-term election in 2022 and in the next presidential election in 2024. 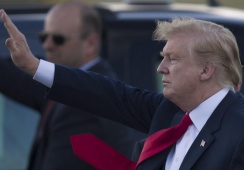 Trump: His game is over