The search for happiness

The Hanoitimes - A British man, who went through a rough patch, has found love of his life and settled down in Vietnam for more than a decade.

Wayne Worrell, 55, has spent 11 years teaching English in Vietnam after taking more paths through a number of countries.

He did many campaigns through Covid-19 to bring unity in Vietnam. He won the 1st prize at the National External Information Service Awards 2020 for the campaign “Vietnam We Thank You – Viet Nam Co Len” in the Covid-19 pandemic.

"It all started some 35 years ago with seeing magical images of Vietnam I instantly felt attracted to what I saw. This feeling kept on growing inside me over the years which seemed to float by in the breeze so did the endless paths I took always leading back to the same place, alone and afraid.

Over the next 15 years I took many adventures including being married and divorced twice, I was always searching for something but never finding it.

In 1999, I then embarked on a new journey from tourism to teaching English and over the next 10 years I took many more paths but this time through Egypt, Turkey, China, Hong Kong, Taiwan and Japan this also led to two more failed marriages, I thought I was never going to find true happiness, but now with being in Japan, something deep inside me told me it was time to follow my dream, I was so close to where I was meant to be, the urge was so strong and one day a couple of months before my contract was going to be up I decided to it, it was time to see if my feelings had been true all those years.

At the end of December 2009, I came for a two-week holiday to find work, it had changed so much from the images I had stored in my memory, gone were the bicycles and peace replaced by motorbikes and pollution but it didn’t matter as from that point on my life changed dramatically as everything slowly became positive.

Over the next three years, I just got on with life but this time not looking and one day at lunchtime I met my future wife by chance in Hoan Kiem’s KFC of all places, a year later we were married and over the coming years we had three wonderful sons who are now 5, 4 and 2 years old.

Ten years on, I looked back at my life, the paths I had taken, the mistakes I’d made the marriages that had failed and then for the first time I realized, they weren’t mistakes nor failures, they were all tests to put me on to the right path to happiness.

At the end of January 2020, we were just finishing our family holiday in Phu Quoc when the news was released about Covid-19, from that point on I was no longer teaching but a full-time dad with three screaming boys running havoc.

At the beginning of March, I came across an article in VNExpress talking about the blood shortage throughout the country as people were too scared to go out and decided to see if there was anything I could do to help my adoptive country, of course I donated blood but also took photos and put a call out for other people to do the same through social media, it went viral within hours and the blood banks were replenished within a short period of time.

It felt so great that some of the barriers which had come up towards foreigners were removed, so I continued with not only the support of the expat community but also the Vietnamese people and ran another four campaigns and participated in another right up to the end of August 2020 with the most famous one being “Vietnam We thank you, Viet Nam Co Len” which also went international.

None of what I did with the help of countless expats and Vietnamese alike was for stardom or fame in anyway, just to bring unity through a difficult period in our lives and to show and thank the country I love so much my personal gratitude was enough.

From the beginning of September, my boys went back to kindergarten, schools re-opened, I started teaching after seven months of being a stay at home dad and some form of normality returned.

So here I am now, 10 years on, married to a wonderful and beautiful Vietnamese woman with a perfect family and life.

So the moral to this story is “always believe and follow your dreams because some day, don’t know when, they may become reality”.

This is why I love Vietnam and I know Vietnam Loves You. 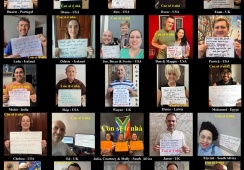 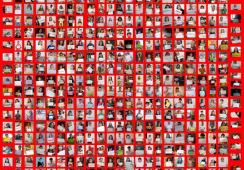 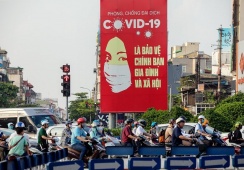