Harris said the donation is free-of-charge with no strings attached.

About 750,000 Pfizer vaccine doses out of one US-donated million arrived in Hanoi and Ho Chi Minh City today, less than 24 hours after US Vice President Kamala Harris's announcement when she met Vietnam’s Prime Minister Pham Minh Chinh on August 25.

Today [August 26], Harris came to witness the arrival of the vaccine in the National Institute of Hygiene and Epidemiology (NIHE) in Hanoi, saying that the US is “very thankful to the Vietnamese for coming through when the country needed support early on in the pandemic” when the US had a hard time in April 2020. Vietnam sent PPEs at that time.

In a visit to NIHE, Harris was provided a guided tour of the ultra-low temperature facility where the Pfizer-BioNTech vaccine is stored. An additional 269,100 doses are expected in Hanoi tomorrow.

Harris said the donation is free and no strings attached, an expression of America's support to Vietnam and the Vietnamese people.

On the same day, Australia’s Foreign Minister Marise Payne Australia announced that Canberra will donate to Vietnam 400,000 AstraZeneca vaccine doses which will be delivered later this week. It’s the first batch of 1.5 million doses that Canberra pledged to share with its “strong, strategic partner.”

In another move, PM Chinh asked the Ministry of Health to facilitate the import of 15 million Pfizer doses by DonaCoop. The company’s General Director Bui Thanh Truc said today that it has reached a deal and the supplier has prepared the amount.

As the number of infections surges, Binh Duong quickly builds a 150,000 case scenario to prepare facilities and manpower for it. It predicts to see additional 50,000 cases in the next two weeks.

To help the locality cope with the pandemic, the army will send 2,000 soldiers to join the quarantine and treatment of Covid-19 cases and distribute food to lockdown areas. Military medics will bring mobile medical stations and ambulances to the area, according to Lieutenant General Ngo Minh Tien, Deputy Chief of the General Staff, the Vietnam People's Army.

Earlier, the local government decided to provide 5,700 tons of rice and food worth VND540 billion (US$23.5 million) to 720,000 residents in the 11 most-affected wards in Thuan An City and Tan Uyen Town.

On August 26, PM Chinh worked with Ho Chi Minh City (HCMC) on the pandemic fight, asking them to conduct both testing and treating confirmed cases amid the medical facilities are stretching capacity. He suggested relocating residents to outlying districts to avoid cross-infection in some affected areas with high population density.

In addition, the PM asked the armed forces and health sector to spend forces to the largest city for the pandemic fight. In another move, he asked the local government to cut unnecessary investment costs to save money for essential sectors.

Deputy Minister Vu Duc Dam requested authorities to boost the testing in hotspots to detect infections in the community and quickly quarantine the affected areas to curb the spread of the virus.

Notably, after three days of massive testing, 3.5% of nearly one million tests have returned positive results.

Dam also stressed the need of boosting vaccination. “We try to vaccinate many to achieve herd immunity as soon as possible so that we can gradually reopen economic activities in the city while strictly controlling people coming in and out to prevent the spread to other localities.”

Hanoi today reported 66 new cases, including 55 in the community. Thanh Xuan District is currently the city’s epicenter with more than 70 infections, leaving nearly 1,700 first-generation contacts (F1). Deputy Director of the Hanoi Center for Disease Control and Prevention Truong Quang Viet said the city should be aware of the community infections though the number of daily cases is not high.

On the same day, the central beach city of Danang said it will soon set up hotlines (mobile contacts and emails) to support foreigners reside in the locality. At the same time, it provides essential goods to foreign people who are in difficulties. Over the past few days, it has reached foreigners with food. 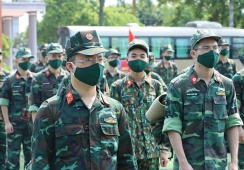