Hanoians were allowed to do outdoor exercises as of today after two months and a half.

On Sept 28, Vietnam reported 4,589 coronavirus infections, the record low in the two months and a half. Today is the first day that the number of infections is one-fifth of the recovered.

Regarding vaccination, more than 40 million doses have been administered, including nearly nine million people fully vaccinated in Vietnam. Ho Chi Minh City topped localities for the number of vaccinated people. The city has been providing the second shots to around 40% of its seven million adults aged above 18.

As part of efforts to mitigate damage caused by Covid-19, the Vietnam Social Insurance (VSI) will disburse an amount of VND30 trillion (US$1.3 billion) to more than 10 million laborers who suffered from the pandemic.

In a broader supporting move, the government will reduce land rent to tenants. Under the Prime Minister’s decision, enterprises, households, and individuals who are parties in annual contracts with the state will be entitled to a 30% reduction in rental in 2021.

Given relaxation a week ago, Hanoians were allowed to do outdoor exercises from today. Since the early morning, people were eager to join public physical exercises after two months and a half.

To serve its anti-pandemic mission, Hanoi’s authorities have requested the Ministry of Transport to continue suspending commercial flights to the city.

The request was made following the ministry’s plan to resume domestic flights from October among areas with relaxed restrictions.

Hanoi has relaxed restrictions by resuming essential services and allowing small public gatherings since Sept 21 after it underwent two months of strict social distancing. Today is the fifth day it recorded no locally transmitted cases.

Chairman of Go Vap Nguyen Tri Dung said the district meets the Ministry of Health’s criteria on pandemic containment. In three weeks starting Sept 2, the number of infections in the community dropped by 50% from more than 3,000/week to around 1,500/week. Notably, the district recorded no new infection clusters in the past week.

So far, no place in the district is labeled “red zone” or very high-risk area. Meanwhile, its full vaccination rate covers more than 30% of adults aged above 18.

He said the local authorities will prioritize the resumption of essential services and remove inner solid barriers to facilitate residents’ daily activities.

Go Vap, where is home to a cluster linked to a Christian mission in late May, used to be one of the high-risk areas in HCMC in the past few months.

Phu Nhuan shares the same status with Go Vap as its infections were down by 60% within the past three weeks. The rate of fully vaccinated people accounts for more than 48%. Up to 75% of its areas are “green zone” (safe). The local government considers reopening essential services.

Thanks to efforts in curbing the transmission, two hospitals District 7 and Cu Chi District were switched to normal hospitals specializing in treating Covid-19 patients.

Regarding treatment, the city has requested private hospitals not to charge fees from Covid-19 patients. Accordingly, all treatment fees, including checkup, bed, technical services, drug, blood, infusion, among others would be paid by the state. In case of death, the funeral cost will also be covered by the state.

Keeping in mind that testing is the key measure in coping with the pandemic and preparing for the reopening plans, HCMC has received 11.5 million test kits and another 2.5 million in the next few days from donations nationwide to serve the mission, according to Nguyen Hong Tam, deputy head of the HCMC Center for Disease Control (HCDC).

In its reopening road map, the city will prioritize the operations of big firms, plants, hi-tech parks, and important services, local authorities said in a meeting with Deputy Prime Minister Vu Duc Dam on Sept 27. 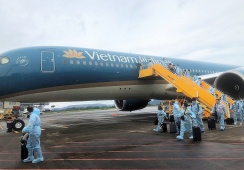