Although many new local and international brands of ice-cream have been introduced in Hanoi, the one made by Trang Tien is irreplaceable to many people, thanks to their unique flavors and fresh and natural taste.

Neither 'Pho' nor 'Bun Cha' (grilled pork with noodle), Trang Tien ice cream is what come first to people’s mind when they are in the center of Hanoi.

As Hanoi is easing the social distancing when the Cobid-19 pandemic is gradually under the control, the local people once again queue in line in front of Trang Tien Ice Cream Shop, especially the young and families. All of them are eager to satisfy their thirst for the exceptionally cool delicious taste of one of Hanoi’s typical dishes.

One of them, 22-year-old Thuy Mai from Ba Dinh District said that she chose Trang Tien Ice Cream as a place for a date with her boyfriend. “Both of us love Trang Tien ice cream so much and it’s really fresh and tasty to have a good evening here to cool down this heat together,” she told The Hanoi Times.

Not only the residents but also visitors from other places come here to enjoy the famous ice cream of the capital.

The first ice cream was brought to Vietnam by the French in the colonial period, initially offered at the Grand Hotel on Hang Trong Street, Hoan Kiem District. At that time, ice cream was a luxury dish for Vietnamese people and not everyone could afford it. It was not until 1958 that Trang Tien ice cream was introduced to the public at 35 Trang Tien Street, after which the ice-cream brand was named.

Trang Tien offers several kinds of ice-cream including fresh ice-cream, popsicle, cone ice-cream and mochi. Among them, the best-seller is the ice-pop. To date, besides flavors of vanilla, strawberry, taro, green tea and durian, Trang Tien still produces the four basic ice-cream on stick exactly like over 60 years ago, which have been kept in the childhood memories of many Hanoians.

“I love all of the traditional flavors. Com (young flakes rice) is so unique while the green bean has its typical flavor, the coconut milk comes with the sweet savor and the chocolate is a great mixture of sweet and bitter,” 30-year-old Minh Anh from Dong Da District, Mai’s boyfriend, told The Hanoi Times. His mother was also a big fan of the coconut milk ice pop and used to take him and his younger sister to the shop a lot of times when they were small.

Minh Anh still vividly remembers when he first enjoyed an ice pop there more than 20 years ago. “It bewitched me with its fragrant cooling of my tongue as I licked it bit by bit with an aim to prolong my craving and interest,” he stated.

Like Anh, many people keep the same sweet memories with Trang Tien ice cream. It has been attached with their beautiful days walking in the city center with their family, friends, or partners, excitedly waiting for grabbing a bite of the delicious ice cream and happily enjoying it together.

The Kem Trang Tien is not only simply a Hanoi’s specialty, but also a ‘symbol’ of the capital. Although many new local and international brands of ice-cream have been introduced in Hanoi, the one made by Trang Tien is irreplaceable to many people, thanks to their unique flavors and fresh and natural taste.

The application of handicraft production without using preservatives is the secret for their products to keep good sales, not only in summer but also in the winter. Thousands of ice-creams are sold everyday, according to Hong Nhung, one of the sellers.

Moreover, the “luxury” food of the old time is now dirty-cheap that anyone can enjoy, for only VND 10,000 (US$43 cents) for a stick ice-cream.

Many tourists are also impressed by the ice cream. Like Christian Taylor from England who has just had three popsicles and told The Hanoi Times “I like them a lot, especially Com. I have never had something like this before. It’s very different and interesting to feel the grains of the young rice in every bite. And this standing style of enjoying it is fun as well.”

Recently, Trang Tien ice-cream has spent over VND10 billion (around $434,000) to renovate the shop with a new look, however, yet it’s without chairs or tables, as always, customers enjoying their ice cream standing up. It's actually people's favorite traditional way, reminding them of the hard time of economic subsidy, when they had to queue and buy products with coupons.

In the long lines, nobody seems to be annoyed or tired of waiting. On the contrary, they are all excited for the food and noisily chatting with their friends, partners or family members, or even some strangers. Then they happily enjoy savory ice-creams on foot all together, creating a lively vibe for the special ice-cream culture of Hanoians. 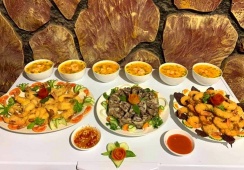