Vietnam continues to be a key partner of the UK in the region, especially as the UK prioritizes greater cooperation with the India-Pacific region.

The UK stands ready to assist Vietnam in realizing the latter’s commitments made at COP26, especially in the reduction of carbon emissions and energy transition.

According to Milling, Vietnam continues to be a key partner of the UK in the region, especially as the UK is shifting its priority towards greater cooperation with the India-Pacific region.

She thanked Vietnam’s support for the UK to become a dialogue partner of the ASEAN, as well as in its accession to the CPTPP.

Vietnam’s Deputy Minister of Foreign Affairs Pham Quang Hieu said the country has implemented steps to curb greenhouse emissions via domestic sources and international support while calling for the UK to provide financial support for Vietnam to realize its commitments made at the COP26.

The deputy minister expressed thanks for the UK Government’s timely support of Covid-19 vaccines and medical equipment for Vietnam in the fight against the pandemic.

He called for the two countries to enhance cooperation in education and training, and for the UK to create favorable conditions for Vietnamese students to participate in science projects under the UK Government-financed Newton Vietnam Program.

The two reaffirmed the strong progress in bilateral relations that are in line with the joint statement between Vietnam and UK in September 2020 on strategic partnership.

As the pandemic has been put under control in each country, Vietnam and the UK agreed to further promote high-level exchanges and the resumption of cooperation mechanisms, including the policy dialogue of deputy ministers of defense, and the Vietnam-UK Joint Economic and Trade Committee (JETCO).

Ahead of the 50th anniversary of the Vietnam-UK diplomatic relations establishment (1973-2023), both countries have agreed on organizing a series of activities on trade promotion, tourism, and cultural exchanges.

Both sides expressed delight at the effectiveness of the UK-Vietnam Free Trade Agreement (UKVFTA), which after one year of implementation has pushed bilateral trade turnover to $6.6 billion.

With 452 projects and a total capital commitment of over $4 billion, the UK remains Vietnam’s 15th largest investor out of 140 countries and territories.

Both Vietnam and UK have committed to taking advantage of the deal to create breakthroughs in trade and investment cooperation; expanding the partnership in the digital economy, energy transition, green finance, infrastructure development, and finance banking.

There have also been positive results in security-defense cooperation between the two, highlighted by the visit of the UK Defense Minister Ben Wallace to Vietnam last July, as well as the implementation of the Vietnam-UK defense policy dialogue.

The UK would continue to help enhance the capability of Vietnam’s soldiers for UN peacekeeping missions, along with further cooperation in the fight against human trafficking, cybercrime, and organizational crimes.

Both agreed on close cooperation in multilateral framework and regional cooperation mechanisms, stressing the importance of maintaining freedom of navigation and peace in the East Sea. 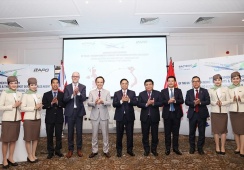