The Hanoitimes - Guided by the values of sustainability and respect for local culture, the deal envisions Hanoi's development as a “Creative Capital” whose development builds on its creative past and the energy of its youth.

Vietnam’s SOVICO Group has become a strategic partnership of the United Nations (UN) after the signing of a Memorandum of Understanding (MoU) in Hanoi on September 23, pledging to develop Hanoi into a UNESCO Creative City, Kinh Te & Do Thi reported.

Noting that both parties share common interests in promoting youth engagement, green growth and the protection and promotion of natural and cultural heritage in Vietnam, the MoU establishes a long-term framework for action, and calls on the parties to work together to broaden this partnership with other like-minded Vietnamese businesses.

Guided by the values of sustainability and respect for local culture, this partnership envisions the development of Hanoi as a “Creative Capital” whose development builds on its creative past and the energy of its youth.

Speaking to the gathering of interested parties including government ministries, city officials and international partners, Ms. Thao stressed that this partnership with the UN to support Hanoi’s cultural heritage and development demonstrates the continued commitment of SOVICO and its affiliates to support the long-term development of Vietnam by assisting youth leadership to make meaningful contributions to social, cultural and economic development in the country.

“We also expect our cooperation with the UN through UNESCO technical assistance will help establish a SOVICO Fund for Vietnam’s Heritage & Innovation to support even more initiatives and solutions for cultural and green city development, artistic and design activities, as well as creative hubs to nurture creative talents, promoting entrepreneurship and innovation,” Ms. Thao said.

For his part, Mr. Kamal Malhotra noted that with this new partnership, SOVICO Group demonstrates its commitment to sustainable development in Vietnam and to the principles and values of the UN.

“We salute them for being pioneers among Vietnamese corporations, and welcome them as partners. We hope that SOVICO’s example will inspire other Vietnamese private sector companies to take the necessary actions that will realize a sustainable future for Vietnam," said Mr. Kamal Malhotra.

Vice Chairman of the Hanoi People's Committee Ngo Van Quy praised this strategic and pioneering partnership, as the cooperation between SOVICO Group and the UN is a vivid manifestation and a specific action, which support the capital city's development. 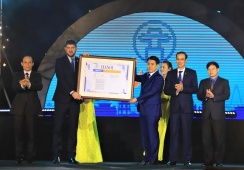