The Hanoitimes - Work on Station S9 has advanced the most among the four underground stations.

Nhon - Hanoi station Railway, Hanoi’s second metro line after the Cat Linh-Ha Dong, has four underground stations: S9, 10, 11 and 12. The main level of Station S9 has just been concreted to connect up to the streets or down to the platforms via elevators, Kinhtedothi.vn reported.

S9 is the first of four underground stations to be built on the route and located in the Kim Ma - Nguyen Chi Thanh junction.

“The concreted surface is the transfer floor and it has the two functions of picking up and seeing off passengers. Ticket counters and installing automatic ticketing devices will be installed here,” said Le Trung Hieu, deputy head of the Hanoi Metropolitan Railway Board (MRB).

Work on Station S9 has advanced the most among the four underground stations. The construction is often carried out at night, thus it makes no negative impact on traffic flow on the route as well as the urban landscape.

According to the MRB’s leader, during the Covid-19 pandemic, construction of the Nhon - Hanoi Railway Station line continued with three shifts per day. Workers have made efforts to comply with the epidemic prevention measures and ensure the project’s progress.

It is expected that by the end of June 2020, the construction of concrete transfer floor will be completed.

“After more than a month of excavation, we have cleared the underground terrain. As scheduled, this underground station will be finished by 2022,” Hieu said.

Construction of this project was started on October 10, 2010. According to the MRB, the project’s first 8.5 km of the elevated tracks will be inaugurated in April 2021, then the remaining 4 km of the underground stretch will be completed in December 2022 and the entire line is expected to become operational by that time.

The total cost of the project has been revised up to EUR1.176 billion. Of the total, EUR178.7 million was sourced from ODA funding by the French Development Agency (AFD) and EUR355.1 million was lent by the French government. 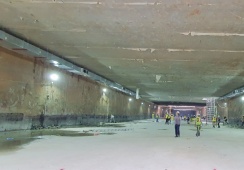