The Hanoitimes - In May, the Hanoi Center for Employment Service received nearly 11,700 claims for unemployment compensation, an increase of nearly 41% year-on-year.

The Hanoi Center for Employment Service has been overloaded processing unemployment benefit claims these days as the Covid-19 crisis has left many people jobless, VnExpress reported.

In May, the center received nearly 11,700 claims for unemployment benefit claims, an increase of nearly 41% year-on-year.

In the first 10 days of June, the center received more than 4,500 applications for unemployment benefits. On June 10 alone, over 2,000 applications were processed.

"As of July, our work will be likely more stressing," said Ta Van Thao, the center’s director, adding that the impacts of Covid-19 on the labor market will be more evident, as people who lost their jobs in April and May begin to file claims for unemployment benefits.

As a rule, workers who want to benefit from this policy need to bring valid documents to the public employment service center within three months from the date of contract termination, Thao noted.

To reduce the workload for the center, an online application for filing unemployment benefit claims has been on trial run with 40 claims per day. However, the official launch of the application is pending its integration into the city's network of online public services, Thao said.

Not only being busy processing applications, the center staff are tied-up with disease prevention measures. For over a month now, a worker of the center has had to measure body temperature for an average of a thousand people every day, the number even peaked 1,500 at times. 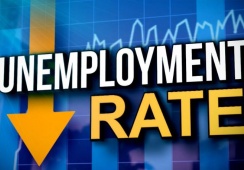 Hanoi strives to reduce urban unemployment rate to below 4%