The Hanoitimes - The French- built villas is a legacy that makes Hanoi's urban elegance and beauty unique in South East Asia.

In recent years, many old French colonial mansions in Hanoi have been used for different purposes with loose management and preservation. This has seriously affected the architectural, historical and cultural values of the capital and requires action to preserve the architectural heritage of Hanoi urban city.

The old French villas have a long history, which are built across the core districts of Hanoi. These are works with many cultural and architectural values associated with a historical period of the capital. However, many of them have been deteriorated and damaged recently.

The French- built area in Hanoi, which began construction in the 1870s, has left its mark on the development of the capital city. The grid layout was planned and built following the Western style for square blocks. The French divided the streets into small lots to build villas with spacious gardens. At that time, the “Western Zone”, as it was called, mainly consisted of two-storey villas, built for French civil servants and business people to live.

During 70 years (1875-1945), the Western Zone gradually formed, marked the development phase of Hanoi outside the old 36-street area and left an urban heritage to this day. Although there are differences in the structure, hundreds of villas built with the typical French architecture and design still coexist with the traditional architectural works of Vietnam, creating the unique East-West cultural interaction. French villas are considered as tangible works, reflecting the architectural history of the capital development. It is an existing legacy that makes Hanoi's urban elegance and beauty unique in South East Asia.

Vice Chairman of Hanoi Architects Association, architect Le Van Lan has said that the planning and architecture works in the new stage of the city now requires renovation to meet development context. However, it is necessary to keep the culture in Hanoi's urban area, also the difference of Hanoi from other cities. International visitors to Hanoi not only admire the modern urban areas but also are attracted by the heritage system, including the architecture of the old French villas.

The large value and profit of these villas have been damaged as their owners are using them for different purposes, which is contrary to the protection and preservation regulations of the country.

For example, the villas of 51, 51A, and 55 in Hang Chuoi Street are now renovated into beer clubs and restaurants or villa 7/Lane 2 in the same street was demolished and replaced by a seven-storey building. Many others in streets of Tang Bat Ho, Pham Dinh Ho, Tho Nhuom, Tran Hung Dao have also been renovated into restaurants.

Deputy Head of Housing and Real Estate Market Management Division (Hanoi Department of Construction) Vu Duc Thang said in the government’s Decision No. 7177/2013 / QD-UBND, there are 1,253 old French villas in Hanoi built before 1954 which were classified and conserved into three groups, including 225 villas of Group 1 consisting of villas associated with historical, cultural, political events or with special architectural values; 382 villas classified in Group 2  for architectural values and 646 villas in Group 3 for other values.

“One of the difficulties of the state management of these villas is that the work is managed and used by many agencies, organizations and individuals, so in many cases there is no timely update for the changes in renovation and reconstruction,” Mr. Vu Duc Thang said.

Previously, the Legal Department (Hanoi People's Council) stated that, at present, many villas and architectural works before 1954 in all three groups, especially Group 3, have been refurbished. Although the Prime Minister and the People's Committee of Hanoi have instructed related agencies  to stop licensing  the  building and demolition of these villas, still 25 old villas have been either demolished or renovated.

The monitoring and management work is not strictly carried out either as 63 villas have been demolished without license, 19 villas reported to be severely degraded, 48 others have been reported as being brought downde but in fact 16 villas of them still remain and other 35 villas have only been repaired and so on. 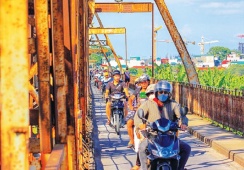 Ancient French architectural works worth being visited in Hanoi