The Hanoitimes - Many French villas have fallen into serious degradation, but in order to have a specific assessment of the degradation level, they had to hire specialized units to evaluate each project which needs hundreds of millions of VND for restoration.

Deputy Director of the Hanoi Department of Construction Nguyen Chi Dung said that in implementation of the Government's Resolution No. 48/2007 / NQ-CP, the department has collaborated with relevant agencies to review and make a list of 970 state-owned old villas managed by the city authority. It also advises the City People's Committee for the project on management of old villas in Hanoi.

“In the period from 1954 to 2009, the old French houses and villas were only considered as a type of housing. The state has no regulations and policies to preserve and renovate. In the process of using them, many households have renovated and reconstructed at will and even changed their original structure with many historical and cultural values," Mr. Nguyen Chi Dung said.

According to Assoc.Prof. Dr. Truong Quoc Binh, the former Deputy Director of the Department of Cultural Heritage (Ministry of Culture, Sports and Tourism), currently, there is a lack of basic regulations in the state management of historical and cultural relics, including old French buildings and villas, and the decentralization of management overlaps with the functions of ministries, branches, and authorities of the city, districts and wards.

Therefore, the authorities cannot handle violations promptly. “The inconsistency of legal documents has led to the damage of these works recently. Besides, it is a lack of strict supervision from the authority as well. I think it is necessary that all management levels have the responsibility if there is a violation," he said.

Dr. Nguyen Quang Minh from Hanoi Construction University said that French houses in Hanoi were built and put into use more than 100 years ago, showing a typical architectural heritage of the French colonial period. However, these houses have not been systematically studied.

“This type of urban housing has its own characteristics and, in many cases, they have a high architectural value and need to be thoroughly and fully evaluated as the basis for conservation in the context of  many risks as well as the impact of the market economy and strong urbanization,” he said.

Deputy Head of Housing and Real Estate Market Management Division (Hanoi Department of Construction) Vu Duc Thang said that since 2015, the department has completed the review and listing of old French villas and houses to classify, manage, and conserve. In which, many works have fallen into serious degradation, but in order to have a specific assessment of the degradation level, they had to hire specialized units to evaluate each project which needs  hundreds of millions of dong for restoration. 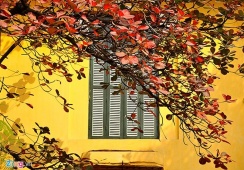