The Hanoitimes - The visit signals Washington's intends to remain the pre-eminent naval power in the South China Sea.

The visit marks the second time a US Navy aircraft carrier has visited the Southeast Asian country since the end of the Vietnam War, following the first in early 2018 by USS Carl Vinson (CVN-70) to the same port city destination.

Roughly 200 miles away from Danang is China’s Hainan island and Vietnam’s Hoang Sa (Paracel) Islands in the South China Sea. Both China and Vietnam claim the Paracel Islands, but China currently controls them after the invasion in 1974.

The US Navy recently increased the frequency of freedom of navigation operations in the region, including passes by the Paracel Islands.

Chinese officials are dismissive of the role which the US plays in maintaining peace and security in the region. Chinese defense ministry officials routinely criticize US military operations in the South China Sea. 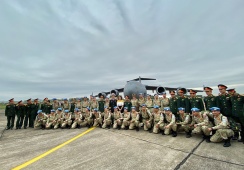