The Hanoitimes - Before these party conventions, the constellation in America swung in favor of the Democratic couple Biden-Harris. But now, Biden's gap with Trump is narrowing.

In the United States, the race for presidential elections has entered its final stage with both parties holding their conventions to officially nominate candidates for president and vice president. They are incumbent Donald Trump and Mike Pence on the Republican side and former Vice President Joe Biden and his running mate, Indian-origin Senator Kamala Harris, from the Democratic Party.

These events are intended first of all to mobilize each side's loyal voters and to convince the undecided voters or at least not to enable the other side to win the country's ultimate game of state power.

At the first glance, both Trump and Biden didn't present a clear and comprehensive agenda for governing if they win the election. They all concentrated on portraying how horrible and catastrophic the USA would be if their political adversary win. Sowing fears and concerns instead of inspiring hope and optimism, demonizing the other side instead of presenting themselves as the better choice – these two parties did not differ much from each other.

Before these party conventions, the constellation in America swung in favor of the Democratic couple Biden-Harris. But now, Biden's gap with Trump is narrowing. Trump's campaign strategy is radicalizing attacks on Biden personally, by using the so-called "alternative facts", the same card played by Richard Nixon with his "Southern Strategy" in the 1968 campaign to portray himself as commander-in-chief to restore law and order in a violent, socially and politically unstable America. By that time, China was also another card. Until now, Biden's campaign has been deemed too soft and too passive compared to Trump's campaign aggressiveness.

Just now, both of them still have real chances to win. And it still is possible for either of them to lose. Biden must find a more effective campaigning strategy to successfully counter Trump's determination to stay in power at any cost and to neutralize Trump's advantages as incumbent president. Biden has to do it just now and not later because he and not Trump has now to run against the time. Trump is still beatable. The only question is simply whether Biden could promptly find the right and proper ways and means to oust Trump from the White House on November 3. 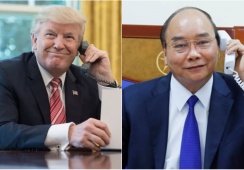 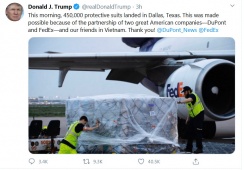 President Trump thanks Vietnam for delivery of 450,000 protective suits