The Hanoitimes - Any citizen in need of help should call diplomatic missions via the contact posted on their websites or citizen protection hotlines.

Vietnam brought 800 Vietnamese nationals to the country safely between March 21 and March 25 as part of efforts that the Vietnamese government has made in the context that other nations impose travel restrictions to curb the spread of the coronavirus.

Spokesperson Le Thi Thu Hang of the Vietnamese Ministry of Foreign Affairs revealed the information at a press conference on March 26 that diplomatic missions are working with related parties to bring 40 more Vietnamese citizens who are stranded at foreign airports.

Any citizen in need of help should call diplomatic missions via the contact posted on their websites or citizen protection hotlines, Hang said.

Vietnam's diplomatic missions overseas have been actively helping Vietnamese nationals find flights to go home and no Vietnamese diplomat has been found positive with the coronavirus so far, Hang informed.

As the global pandemic has become complex and unpredictable, Vietnam has suspended the entry of all foreigners from March 22. Meanwhile, many countries have closed borders to limit the spread of the virus.

The moves have somewhat resulted in the difficulties in traveling, leaving many people stuck en route home.

Two airports in Hanoi and Ho Chi Minh City have been required to stop receiving international flights that carry Vietnamese passengers from March 26 to March 31 due to overload of mass quarantine establishments.

National flag carrier Vietnam Airlines has suspended all international routes in a phased manner until April 30 while VietJet has halted flights to and from ASEAN and Northeast Asian countries from March 20, except for the Hanoi-Tokyo route that will be operated until April 4.

When the epidemic broke out in Chinese city of Wuhan, Vietnam Airlines took a flight to repatriate 30 citizens on February 10 on a flight served by 15 crewmembers and three doctors. 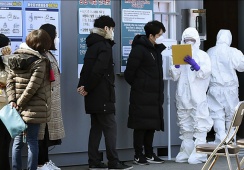