As of January 24, the number of delivery trucks being stranded at Lang Son Province was 355, a sharp decline from nearly 4,000 one month ago.

Authorities of the Chinese Guangxi autonomous region and Vietnam’s Lang Son Province on January 25 resumed customs clearance at the  Pu Zhai (China) – Tan Thanh (Vietnam) border gates after more than a month of closure, according to Vietnam’s Ministry of Industry and Trade (MoIT).

The reopening of Pu Zhai – Tan Thanh border gates came one day after the visit of Minister of Industry and Trade Nguyen Hong Dien to the northern provinces of Lang Son and Quang Ninh to address the ongoing clogging at border checkpoints.

The decision from the Chinese side to reopen their  Pu Zhai border gate is seen as a positive move ahead of major meetings between high-ranking officials from the two sides to resolve trade issues, which have been agreed upon by the two prime ministers in a phone talk on January 13.

As of January 24, the number of delivery trucks being stranded at Lang Son Province was 355, a sharp decline from nearly 4,000 one month ago.

Given the fact that Pu Zhai – Tan Thanh border gates are a key border trading route between the two countries, its resumption is set to speed up the customs clearance process to fully resolve the issue before the Lunar New Year.

The MoIT, however, warned the uncertainties surrounding the pandemic mean the pace of customs clearance and procedures at these border gates between Vietnam and China may not return to normal any time soon.

The ministry called for localities and traders to comply with anti-Covid-19 restriction measures during the delivery process, which is a key factor to maintain the sustainable operation of border gates in the future.

At a recent Government meeting, Deputy Prime Minister Le Van Thanh requested authorities in provinces/cities and ministries to join hands and address the issue before the Lunar New Year.

Thanh requested the trade and agricultural industries to work on long-term solutions to promote official trade to China, rather than relying on unofficial trade practices via people-to-people exchange. 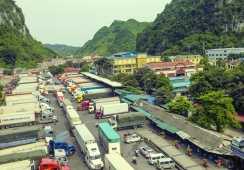