The Hanoitimes - Under the prime minister’s plan on restructuring the stock market and the insurance market until 2020, with a vision towards 2025, all commercial banks are required to float shares before 2020.

As of present, only 18 out of 31 commercial banks have completed listing shares on the stock market, while the 2020 deadline is nearing.

Ten of these banks are currently trading on Ho Chi Minh Stock Exchange (HoSE), Vietnam’s main stock exchange which accounts for over 90% of total market capitalization. The banks include major state-run banks such as Bank for Foreign Trade of Vietnam (Vietcombank), Vietnam JSC Bank for Industry and Trade (VietinBank), and Bank for Investment and Development of Vietnam (BIDV).

Under the prime minister’s plan on restructuring the stock market and the insurance market until 2020, with a vision towards 2025, all commercial banks are required to be listed before 2020.

The plan allows banks to list on any of Vietnam’s two official stock exchanges.

In 2019, only Vietbank completed the listing on the stock market, which was completed by the end of July on the UPCoM with over 419 million shares, equivalent to registered capital of VND4.19 trillion.

Vietnam Maritime Bank (MSB) also applied for listing on the HoSE, but with little progress so far. MSB’s plan for listing was initiated in 2016, after its merging with Mekong Bank.

The remaining banks are looking for a better timing. In 2018, Chairman of Board of Orient Commercial Joint Stock Bank (OCB) Trinh Van Tuan spoke in an interview with Bloomberg of his expectation that the market capitalization of the bank would reach US$1 billion after the scheduled listing in the third or fourth quarter of 2018. However, due to unfavorable market conditions, the plan was held back.

In 2019, OCB reiterated its intention for listing, but at the annual shareholders meeting, the bank’s executive said they were considering the perfect timing for both the bank and its shareholders. OCB, therefore, is looking for foreign investors to support its growth before listing.

Other mid-sized banks such as Nam A Bank, An Binh Bank (ABBank), Southeast Asia Bank (SeABank) have unveiled their plans to list on the HoSE. In early 2019, Nam A Bank approved plan to put its shares on the HoSE and increase its registered capital to VND5 trillion (US$215.77 million) in this year.

However, to date, Nam A Bank has not made any move in spite of its positive business performance recently. By the end of September, the State Bank of Vietnam, the country’s central bank, approved Nam A’s proposal to increase registered capital to VND3.89 trillion (US$168.6 million).

ABBank was supposed to apply for listing after completing dividends payment in July, but apparently the plan is still on the paper. Meanwhile, SeABank is said to go public in the 2019 – 2020 period, but on the HoSE instead of UPCoM as planned in 2018.

Regarding small banks, Saigonbank has approved a plan to list on the UPCoM by the end of 2019 but is expected to miss the deadline. Vietnam Securities Depository (VSD) issued a certificate for registration for VietCapital Bank on September 16 with 317.1 million shares, or registered capital of VND3.17 trillion (US$137.42 million), but the bank has not made the final step for listing.

Other banks such as Vietnam Public Bank (PVcombank), Vietnam Asia Bank (VietABank) did not mention any plan for listing in 2019.

One of banks’ common reasons for delay in listing is unfavorable market conditions. In fact, right after the listing of Techcombank and TPBank on the HoSE in mid 2018, their respective shares have gone downhill, partly due to the volatility of the market.

Additionally, others are facing internal issues, or are looking for strategic partners before listing. 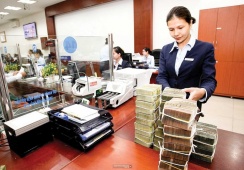