The Hanoitimes - Hotels in Quang Ninh province were over crowded over the weekend.

The Vietnamese government is considering reopening to foreign tourists as the country and the world enter a new normalcy driven by the Covid-19 pandemic, Prime Minister Nguyen Xuan Phuc said at a meeting with key leaders of Quang Ninh province on May 24.

Phuc also asked other localities across the country to strongly promote and prepare all conditions for welcoming domestic travelers in the time ahead.

In the context of the pandemic.

Welcoming back foreign tourists should be prepared with a focus on the safety of tourists, said experts in the field. The Ministry of Culture, Sports and Tourism will submit a schedule for re-starting inbound tourism in the coming time.

In the first four months of 2020, international arrivals to Vietnam plunged 37.8% year-on-year to 3.7 million, according to the General Statistics Office.

In April alone, the number of tourists fell 98.2% from a year earlier and 94.2% against March. The pandemic impacted on the whole tourism industry and its goal of welcoming about 20.5 million international visitors this year is highly unlikely.

At the meeting on socio-economic restoration measures of Quang Ninh province in the post-Covid-19 period, the prime minister praised the encouraging restart of the province's tourism industry with a focus on domestic travelers. Depending greatly on the tourism industry, the province suffered a great loss due to the pandemic.

PM Phuc said he was impressed witnessing the large turnout of domestic tourists to Quang Ninh province almost immediately after the province, home to the UNESCO-recognized heritage Ha Long Bay, reopened for tourists. On May 23 alone, roughly 11,000 people visited the bay.

In the first months of the year, the province has managed to maintain production and social order as well as perform the dual goal of fighting the disease and ensuring economic development. This year, the province aims its economy to grow 12%.

Quang Ninh has become a strong and comprehensive growth pole in the Northeast of the country. However, the prime minister asked the provincial authorities should not rest on the laurel and be vigilant, especially as the pandemic is still evolving unpredictably worldwide. 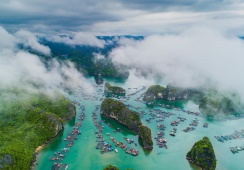