Vietnam continues to be key overseas production base of global giants

The country needs to well prepare for conditions to compete with its rivals in attracting foreign investment.

South Korea’s LG Electronics Inc. announced that a Vietnamese factory in the northern province of Hai Phong and one in Nanjing (China) are two major sites in its automotive electronics productions abroad.

The move of part of the company’s plan to enhance manufacturing efficiency in its automotive business, according to foreign media.

The South Korean company closed its vehicle infotainment parts plant in Kunshan, southeastern China and transferred the production to its plant in Hai Phong. The facility in the Vietnamese northern port city will be responsible for manufacturing components such as audio, video and navigation devices.

LG Electronics, one of the leading home appliance makers in South Korea, has been focusing on bolstering its automotive business in recent years for its future growth. To boost its automotive business, the company opens the first research & development (R&D) center focused on its vehicle solutions in Hanoi. It also planned to build the second R&D center in the central province of Da Nang.

LG’s factory is one of many manufacturing facilities that have planned to expand to Vietnam recently as the country has successfully controlled the pandemic, ensuring stability for investors here.

This year, the Japanese appliance-maker Panasonic Corp will move its Thai-based production of refrigerators and washing machines to Vietnam as part of the global restructuring of its manufacturing.

According to the relocation plan, the large-scale refrigerator manufacturing line will be moved to Panasonic Appliance Vietnam in Hanoi’s Dong Anh district and the washing machine production line will be transferred to the northern province of Hung Yen.

The move of the Japanese manufacturer is part of its plan to improve cost efficiency.

In 2021, Taiwan-based Foxconn or Hon Hai Precision Industry, known as a major manufacturing partner of Apple, will invest in another $700 million manufacturing plant to make MacBooks and iPads in the northern province of Bac Giang. It is part of its plan to shift away from being overly dependent on Chinese production, with the goal of bringing their production outside of China to more than 30% of their total output.

The US tech giant Microsoft is scheduled to start producing its Surface line, including notebook and desktop computers, in the north this year.

In recent years, the sudden increase in trade orders and supply chain relocations at the height of the US-China trade war had had put a strain on China's existing infrastructure, leading to rising business costs , according to local economists.

Meanwhile, Vietnam is an attractive destination as factory wages are between one-half to two-thirds below those in China, and despite those lower wages, the quality of its laborers is comparable to China’s one, according to foreign business associations. 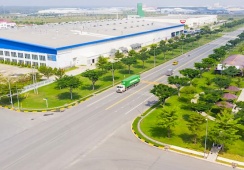