Vietnam extends school closure for one more week over Covid-19

The Hanoitimes - A number of people and experts have warned of a problematic school year if the break lasts long.

Hanoi and other 59 out of 63 cities and provinces across Vietnam as of Friday evening have decided to keep schools shut for one more week till March 8, five weeks in a row, on fears of the coronavirus disease (Covid-19).

The closure will be applied for kindergartens, primary, and secondary schools, except for high schools and vocational colleges, local media reported Friday [February 28].

The majority of vocational schools, colleges, and universities will resume the semester from March 2.

Chairman Nguyen Duc Chung of the Hanoi People’s Committee said the city is fragile at this time after the city has welcomed nearly 2,700 people from epidemic-hit areas. Though the travellers have been quarantined, risk of cross-infection remains high.

Meanwhile, the city’s authority has allowed international schools to end the break by March 2 and resume classes on that day upon request by ambassadors to Vietnam, schools’ administrators, and parents.

Mr. Chung required all schools in the city to sterilize facilities for a sixth time, equip hand sterilizers, and thermometers.

With the long school break, the Ministry of Education and Training plans to extend the academic year until June 30, to hold the high school entrance exam before August 15, and the high school graduation exam between July 23 and 26. The timeline is one month later than the usual timetable.

Dr. Tran Vinh Du, an economics expert, expressed his concern over the long school break. He said that Vietnam should not close schools in March. If so, there would be no spare time to offset the break and the school year 2019-2020 would not be completely finished.

Vietnam is one of 54 countries and territories infected with the coronavirus. The country has reported 16 infected cases and all of them have recovered so far.

However, Vietnam currently quarantines thousands of people returning to the country from epidemic-hit areas.

Over the last few days, hundreds of people from epidemic-stricken South Korea flocked to big cities of Hanoi and Ho Chi Minh City per day. 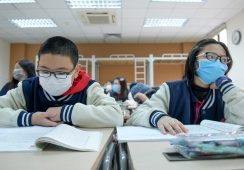 Vietnam yet to decide to reopen schools on Covid-19 epidemic