The Hanoitimes - In 2021, Vietnam strives to have its government bond included in global recognized bond indices such as JP Morgan, Bloomberg Barclays, Citi World Government.

The size of Vietnam’s government bond market as of the end of November is equivalent to 25.1% of the GDP, a 12-fold increase against that of in 2019, according to Phan Thi Thu Hien, head of the Financial Department under the Ministry of Finance (MoF).

The average transaction value in the first 11 months reached VND9 trillion (US$388.4 million) per session, a 24-fold increase against 2009 and equivalent to 0.9% of the outstanding balance of listed bonds, said Hien at a conference discussing 10-year development of Vietnam’s government bond market on December 10.

The local government bond market expanded at an average of 27% per year over the last decade, the highest growth rate among emerging economies in the East Asia, Hien added.

According to Hien, the government has been revising the legal framework to support the development of the market following international practices, contributing to greater efficiency in mobilizing capital for the state budget.

Hien added the government bond market has become a reliable capital mobilization channel for state budget, while the issuance of government bonds is closely related to the effort to restructure government debts.

Government bonds now have maturity-periods of up to 30 years, indicating greater diversification compared to a maximum of 10 year in maturity for bonds in 2009.

Alatabami added the government has shown its commitment to developing the government bond market, focusing on drafting legal basis for the establishment of a debt market and debt management strategy.

The World Bank fully supports the Vietnamese government during the process of developing an efficient capital market, said Alatabami.

As Vietnam faces huge capital needs for development, Vietnam considers the government bond market an essential part for the development of bond and financial markets.

Under the bond market development roadmap during 2017 – 2020, with vision toward 2030, Vietnam aims for the average increase of trading volume of government bonds, government-guaranteed bonds and municipal bonds per session at 1% and 2% of the outstanding balance of listed bonds by 2020 and 2030, respectively. 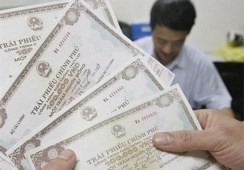