The Hanoitimes - Retired from her current post, Vietnam health minister will focus on the role of the head of the National Commission of Health Services for Senior Officials.

Nguyen Thi Kim Tien is Vietnam's only female minister in the sitting cabinet and only minister who is not a Party Central Committee member. She has reached the established retirement age of 60, thus, she has to retire midway instead of continuing to work till the term ends in mid-2021.

Her replacement has not been announced.

Tien, born in 1959 in the central province of Ha Tinh, was appointed Minister of Health in August 2011, a position frequently deemed to be a hard job along with ministers of education and transport.

During her time as health minister, Tien had assigned herself the task of reducing overcrowding at hospitals. Her reform efforts included raising hospital fees, a controversial decision but many said helped to uplift the dreaded state of public hospitals in the country.

In March 2012, her ministry submitted a master plan on easing hospital overcrowding to the government. The plan, which targets eliminating the problem by 2020, was approved.

Some of Tien’s promises at the beginning of her tenure were realized. The second and third campuses of K Cancer Hospital were opened in 2012 and 2016. The bed occupation rate at the hospital decreased from 249% in 2012 to around 100% in the middle of this year.

In 2013, her ministry developed the satellite hospital model in which district-level hospitals would receive training courses and support from city- and national-level hospitals. Under Tien’s instruction, the Ministry of Health sent young volunteer doctors to poor and remote areas.

Thanks to this model, 19 satellite hospitals have been set up around 23 nucleus hospitals and by 2018, 56,500 hospital beds had been added nationwide.

However, despite these efforts, overcrowding remains a problem at major hospitals across Vietnam.

In an interview with Tuoi Tre newspaper, she said during the eight years in the position, the achievements she was proud of the most was having been able to raise patients’ satisfaction and improving healthcare for the poor, with policies such as providing 100% health insurance subsidy for poor households.

After she retired from the health minister post, Tien will focus on the role of the head of the National Commission of Health Services for Senior Officials, the position she assumed in early July this year.

Previously, the Politburo has assigned Deputy Prime Minister Vu Duc Dam to succeed Tien in the position of the Secretary of the Health Ministry’s Party Committee, effectively making him accountable for the ministry’s activities.

The selection process for Tien’s replacement is not included within the agenda of this session of the NA but the Vietnamese government could assign Tien’s successor soon. 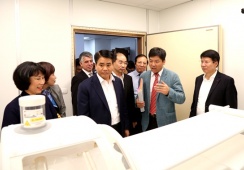