The development of science and technology is demonstrated by Vietnam’s innovation index in the world.

Mr. Dinh made the statement at the Party Congress of the Ministry of Science and Technology for the term 2020-2025 on August 28.

The deputy minister emphasized that the development of science and technology is shown by Vietnam’s GII, which increased 12 places in 2017, two in 2018, and three in 2019, placing the country in the 42nd position out of 129 world economies.

Accordingly, Vietnam was ranked first in the group of 26 low-to-average-income nations and third in ASEAN, preceded by Singapore and Malaysia. This is a 17-spot increase compared to 2016, Mr. Dinh noted.

The technology market has been promoted with 15 technology exchanges, 50 technology incubators, 186 representative organizations of industrial property and a network of centers for applying and transferring scientific and technological advances.

Besides, when the Covid-19 pandemic broke out, Vietnamese scientists immediately cultured and isolated the new strain of the novel coronavirus, which made Vietnam one of the first four countries in the world to successfully isolate the virus, the deputy minister said.

He added that Vietnam also successfully researched and manufactured four sets of biologicals for RT-PCR testing to detect the coronavirus. The products were certified by the United Kingdom to meet European standards and be commercialized in the European market.

For his part, Minister of Science and Technology Chu Ngoc Anh affirmed that over the past time his ministry has gained numerous achievements. Innovation becomes a new mindset in the management and operation of the economy, society and businesses in Vietnam.

"The Vietnamese government considers innovation as a new field in state management, a new pillar in socio-economic development and for the first time, the innovation index becomes a criterion to measure efficiency of the annual business environment and national competitiveness", said the minister.

He stressed that science, technology and innovation have been dealt with in the Vietnam Communist Party's important resolutions so that the country can actively participate in the Industrial Revolution 4.0 and economic integration while joining the new generation of free trade agreements. 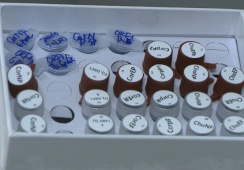