The Hanoitimes - The investment would be a long-term one as profit is not expected in a short period of time.

The Vietnamese government’s investment arm State Capital Investment Corporation (SCIC) is planning a major investment worth up to millions of dollars into flag carrier Vietnam Airlines, said an SCIC executive.

The investment would be a long-term one as profit is not expected in a short period of time, he added.

So far, the plan has been reported to the Committee for State Capital Management (CSCM), which represents state capital at SCIC.

According to SCIC, the investment is among solutions to speed up the recovery process of Vietnam Airlines in the post-Covid-19 period.

Among state-controlled firms, Vietnam Airlines is the hardest hit by the pandemic. The Ministry of Transport estimated the airline would suffer potential losses of over VND30 trillion (US$1.3 billion) in revenue this year.

Vietnam Airlines, in which SCIC holds an 86.2% stake, has been crying for government support. It is the main operator of flights to repatriate Vietnamese nationals stranded overseas.

Meanwhile, SCIC is exploring opportunities to invest in the country’s major projects, including Long Thanh Airport, North-South expressway, as well as potential stake acquisitions in banks and firms.

SCIC targets to raise its asset value to VND82 trillion (US$3.5 billion) in book value, focusing on investment activities in priority fields and creating new driving forces for growth. 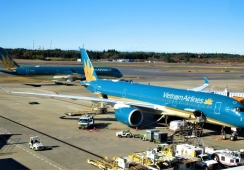 SCIC targets to become a regional-scale financial corporation by 2030