The Hanoitimes - The Vietnamese government is mindful that e-government application is a foundation for the country's socio-economic development and international integration.

Vietnam’s achievements on developing e-government are partly thanks to the contribution of the Embassy of Japan in Vietnam, Minister-Chairman of the Government Office Mai Tien Dung told an online seminar themed “Sharing experience and new policies of Japan to promote e-government, towards digital government” on January 8 in Hanoi.

During the cooperation process, Japan has sent experts to Vietnam to assist the country in building e-government, supporting training courses for Vietnamese officials in Japan and the operation of Vietnamese information centers.

Speaking at the seminar, jointly chaired by the Japanese Ambassador to Vietnam Yamada Takio, Minister Mai Tien Dung said that the Government has implemented the National Document Axis, the National Reporting System, the Government Operations Center, and others that have changed the modus operandi of State agencies and enhanced administrative reform towards creating the best convenience for people and businesses.

Mr. Dung said that in 2021 and the subsequent years, the Vietnamese Government is always mindful that e-government development as a common trend around the world and a foundation for developing the economy and realizing Vietnam's aspirations for international integration.

The development of electronic government must guarantee the strong application of information technology in administrative reform, improve openness, transparency and reform of service methods, taking people and companies as a center and the satisfaction of people and organizations as an important measure of governance, Mr. Dung added.

“Through sharing experiences, Vietnam will continue to take steady steps in implementing e-government, contributing to the development and the prosperity of the country, as well as good relations between Vietnam and Japan,” Minister Dung emphasized.

“At the same time, the Japanese Government hopes that through activities and cooperation programs, we can contribute to helping Vietnam build the e-government, towards digital government,” said Ambassador Yamada. 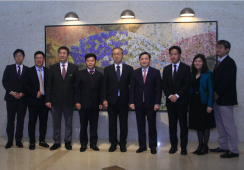